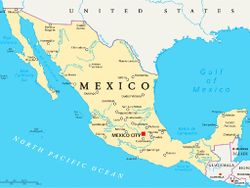 In 1991, Monarch discovered a Titan in pyrostasis inside the molten magma within the crater of Mexico's dormant Isla de Mara volcano. The organization quickly built a facility around the volcano to contain and study the creature, which it gave the designation Titanus Rodan, after the name given to it by the ancients, Rodan. 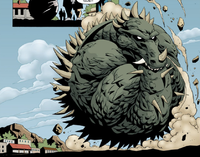 Anguirus in Mexico in Godzilla: Kingdom of Monsters

Anguirus first appeared from underground in Sabinas, Mexico. He gradually made his way north and crossed the border into the United States, where he eventually encountered Godzilla.

Kumonga appeared in Mexico City during Irving "Urv" Jassim's wedding, killing his groom and several members of his family in the attack. Urv swore revenge on the creature and all of the monsters terrorizing the world, and later joined Boxer's mercenary team dedicated to defeating them.

4 months ago
Score 0
Outpost 56 is a reference to Rodan's debut film release,1956
Permalink
↑ back to top ・ contents
Retrieved from "http://wikizilla.org/w/index.php?title=Mexico&oldid=140185"
Categories: