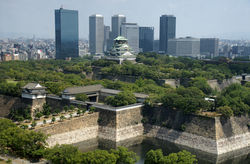 Osaka  (大阪,   Ōsaka) is a major city located in the Kansai region of Japan. 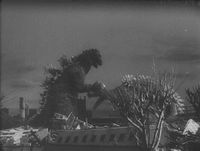 Godzilla arrived on the shore of Osaka. While a blackout of all city lights was enforced, JSDF jets were sent to shoot flares from their planes to lead Godzilla away from the shore. Godzilla saw the flames, and, as Dr. Yamane predicted, started to leave.

Meanwhile, a prison truck was transporting dangerous criminals to another part of the country. All of the criminals, using body language, conveyed to each other that the cover of darkness caused by the city's blackout provided a great opportunity to escape from prison. The prisoners beat up the two policemen guarding them inside the truck, and ran away. A few of them found a gasoline truck, and used it to escape. After a chase with the local police, the truck crashed into an industrial oil refinery, starting a massive fire.

The fire, much brighter than the planes' flares, attracted Godzilla back to the shore of Osaka. A few minutes later, Anguirus swam to shore and attacked Godzilla. The two creatures fought an intense battle, while destroying several buildings, including the tuna cannery that Tsukioka and Kobayashi worked for. In the course of the battle, the remaining escaped criminals were drowned in the subway when it is flooded by the thrashing of the two monsters. Eventually, Godzilla bit Anguirus's neck and threw him upside down into a moat near Osaka Castle. Godzilla then fired his atomic ray at Anguirus, then left the city victorious with the JSDF in hot pursuit.

Gamera battles Barugon in Osaka in Gamera vs. Barugon

After Barugon emerges from the ship and left Kobe in ruins, Barugon then rampaged Osaka as JSDF attempt to kill him with artillery barrage and jets before Barugon freezes everything with its ice mist, sprayed from the tip of his extendable tongue spray and destroy missile launchers with his heat-ray rainbow, emitting from his back. Ultimately, Gamera is attracted to the heat and radiation emitted from Barugon's heat-ray rainbow and rushes across the skies to Osaka to battle the new monster. Although Gamera appears to be getting the upper hand, Barugon soon freezes Gamera with his freezing mist, seemingly killed him. However, Gamera begins to thaw and flies towards Lake Biwa to challenge Barugon once more.

After defeating Biollante at Lake Ashi, Godzilla returned to the Pacific Ocean, with the JSDF desperately trying to track his movements. Based on Godzilla's trajectory, Sho Kuroki determined that Godzilla would surface at Iso Bay, and the Super X2 and a detachment of troops were sent to engage him there. However, Godzilla unexpectedly surfaced in Osaka Bay instead, catching the JSDF completely off-guard. As the citizens were evacuated, Goro Gondo and Kasuhito Kirishima arrived at the Saradia Oil Corporation's Japanese headquarters in Osaka to retrieve the stolen Anti-Nuclear Energy Bacteria. After they successfully regained the ANEB, Gondo had his soldiers load it into their rockets and strategically positioned them in various skyscrapers while the Super X2 distracted Godzilla. Godzilla eventually destroyed the Super X2 with a blast of atomic breath, and continued to the city center. When he arrived, the commandos fired several ANEB-loaded rockets at Godzilla, successfully injecting him with the bacteria. Godzilla noticed Colonel Gondo in one of the buildings and approached him. Gondo turned around and fired another rocket directly into Godzilla's mouth. Godzilla retaliated by destroying the building and killing Gondo. Godzilla then continued through Osaka and eventually left the city limits as he approached the Wakasa Bay area.

9 months ago
Score 0
Probably cause Ōsaka is only second behind Tokyo in importance, so the producers were all probably thinking to have their monsters destroy the “next best thing” since they already destroyed Tokyo.
Permalink
You are ignoring the author of this comment
Show comment | Manage ignore list