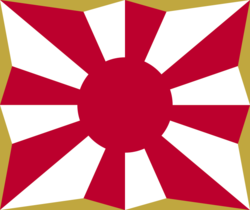 The Flag of the Japanese Self-Defense Forces

The Japanese Self-Defense Forces (JSDF) is the primary defensive military organization for Japan. The JSDF was formed in 1951 to protect Japan from the Korean War. It plays a role in many kaiju eiga (Japanese monster movies) and is often pitted against giant monsters that attack the nation.

The JSDF saw action in 1954, when the monster Godzilla first appeared and attacked Tokyo. Despite the JSDF's efforts, they were unable to defeat the monster and Tokyo was devastated by Godzilla. In the following years, the JSDF would fight repeated battles against Godzilla and other giant monsters like Anguirus, Varan, Rodan, and Mothra. In order to combat these monster threats, the JSDF developed powerful new weapons, the most famous and effective one being the Maser Cannon.

Following the first Godzilla's death in 1954, the JSDF rarely saw action over the next 30 years. Amid tension from the Cold War and the threat of nuclear warfare, the JSDF secretly constructed the Super X, a powerful hovercraft designed to defend Tokyo in the case of a nuclear emergency. In 1984, when Godzilla returned to ravage Japan, the JSDF was mobilized to defend Tokyo using power Godzilla decimated the forces, forcing the Super X to be deployed. The Super X proved effective at combating Godzilla at first, but was destroyed when Godzilla toppled a building onto it.

Following Godzilla's imprisonment in Mt. Mihara, the JSDF began to heavily re-arm in the likely event of his return. The JSDF created powerful electrical ray tanks called Maser Cannons and also created the powerful Super X2 from the remains of the original Super X. The JSDF also began a bio-weapons program using G-Cells collected from Godzilla in order to create the Anti-Nuclear Energy Bacteria (ANEB). When Godzilla did emerge from the crater of Mt. Mihara, he demolished the JSDF's forces, including the Super X2. The ANEB proved to be effective in weakening Godzilla, which led to a draw in his battle with the monster Biollante. Godzilla retreated deep underwater to recover from the ANEB and disappeared for over two years.

Godzilla ultimately absorbed a nuclear sub and recovered from the ANEB, growing to 100 meters tall in the process. Over the next few years, the JSDF would be confronted with other monsters, including King Ghidorah, Mothra, and Battra.

In 1993, the JSDF collaborated with the anti-Godzilla branch of the United Nations, the United Nations Godzilla Countermeasures Center (U.N.G.C.C.), to form a military organization known as G-Force. G-Force soon replaced the JSDF as the primary means of fighting giant monsters that threatened Japan.

After repeated attacks by Godzilla over the years, the JSDF turned anti-Godzilla operations over to an agency known as Crisis Control Intelligence (CCI), led by Lieutenant Mitsuo Katagiri.

Following Godzilla's devastating assault on Osaka in 1996, the JSDF created a special branch called the G-Graspers dedicated to combating Godzilla. The G-Graspers developed a powerful miniature black hole gun called the Dimension Tide, intending to trap Godzilla in a black hole. During a testing of the device, a Meganula entered through the black hole and laid an egg which hatched into an entire Meganulon colony. The colony absorbed Godzilla's DNA and transferred it to their queen, Megaguirus. After Godzilla fought and killed Megaguirus in Tokyo, the Dimension Tide was fired at Godzilla, apparently successfully trapping him. Eventually, it is discovered that the Dimension Tide only buried Godzilla deep underground.

The JSDF was credited with the destruction of Godzilla in 1954 and did not have to fight any real battles in the following half century. However, the recent attack on New York City by another giant monster has put the JSDF on alert. Soon, Godzilla himself returns to seek vengeance on Japan. The JSDF was deployed to stop the monster, but was easily destroyed by Godzilla's furious power. Thankfully, the three guardian monsters Baragon, Mothra, and King Ghidorah emerged to save Japan. With the assistance of the JSDF, especially Admiral Taizo Tachibana, Godzilla was seemingly destroyed and Japan was saved.

Following the attacks on Japan by Godzilla, Mothra, and Gaira, the JSDF formed a specialized branch known as the Anti-Megalosaurus Force (AMF) to combat giant monsters. Using the salvaged skeleton of the first Godzilla, AMF created Kiryu, a powerful bio-robot designed to battle the new Godzilla. Due to its Godzilla DNA, Kiryu initially ran wild and attacked AMF forces. After Kiryu's systems were repaired, it was deployed against Godzilla and fought him to a standstill.

The AMF repaired Kiryu following the battle, but was warned by the Shobijin to return the first Godzilla's remains to the ocean. When Godzilla appeared in Tokyo, Mothra herself came to fight him off. Kiryu was sent to assist Mothra and after a long battle managed to subdue Godzilla. Kiryu was ordered to finish Godzilla, but defied its programming again and chose to take Godzilla with it back to the sea.

As giant monster attacks in Japan became more common throughout the 20th century, the JSDF proved ineffective against the increasing threat. The nations of the world formed the Earth Defense Force (EDF) to combat the monsters and protect every nation on Earth.

After the sudden collapse of the Tokyo Bay Aqua Line in 2016, the JSDF was sent to search for survivors. It was eventually discovered that this was the work of a giant creature that soon surfaced in Kamata. As the creature began to clumsily wander through the district, it endangered many lives, and the JSDF was called in to prepare to assault it. However, the attack was called off when it was discovered that there were civilians in the neighborhood who were unable to escape, their way out was blocked by the creature. After the creature, dubbed "Godzilla," fled to the sea, the JSDF sought assistance from the United States, who quickly mobilized their military forces to offer help.

Much later, after Godzilla's transformation into his fourth form, and the failed attempt by the U.S. military to kill him with Massive Ordnance Penetrator bombs, the JSDF formulated and put into action the Yashiori Strategy, having finally discovered Godzilla's weakness after decoding Goro Maki's studies on the monster. The operation was carried out by the JSDF with the assistance of some American forces, and was successful in freezing Godzilla solid and halting his rampage.

3 months ago
Score 0
can't look at this flag without associating it with nazifascism.(no offence to actual japanese people reading that but ww2 happened)
Permalink
↑ back to top ・ contents
Retrieved from "http://wikizilla.org/w/index.php?title=JSDF&oldid=156158"
Categories: