The Super X (スーパーＸ,   Sūpā Ekkusu) is an aerial vehicle used by the JSDF that first appeared in the 1984 Toho Godzilla film The Return of Godzilla.

Designed to defend the Japanese capital, the Super X was deployed to stop Godzilla when the monster attacked Tokyo. It succeeded in knocking the monster unconscious using its payload of cadmium missiles, but Godzilla was revitalized by a radiation storm and attacked the craft. This time, Godzilla gained the upper hand and finally destroyed the Super X by toppling a skyscraper onto it. However, the craft's remains were salvaged and later used to build a successor, the Super X2.

The Super X was built in secret to defend Tokyo against a military invasion or nuclear accident. However, it was first used against Godzilla when he attacked Tokyo, in conjunction with the N1-00s. The first encounter between the kaiju and the machine was a success for humanity - The Super X discharged its cargo of cadmium missiles into Godzilla's mouth, halting his nuclear reactions to the point that he collapsed against a building, near death. At the same time, an accident involving the damaged Balashevo caused the Soviet Nuclear Attack Satellite to fire a nuclear weapon at the city. An American nuke was launched in response, but the collision of the two missiles generated a massive storm which disrupted the Super X's systems. Lightning from the storm struck Godzilla's dorsal plates and revived him. The Super X, now out of cadmium shells, engaged Godzilla again, but its other weapons were unable to harm him. It was destroyed after a blast of Godzilla's atomic ray damaged its engines and forced it to land, allowing him to drop a building on top of it.

The Super X appears at the beginning of the film through stock footage from The Return of Godzilla and a single shot of JSDF troops recovering its remains. The craft is later referenced as being both the inspiration and one of the sources for the metal used in the construction of its successor, the remotely-piloted Super X2.

The Super X makes frequent appearances as a stage enemy in this game, and is most common on Earth. It flies from the right of the screen to the the screen's center, where it will hover above the player, shooting Cadmium Missiles and dropping bombs towards the player's monster. Because it flies near the top of the screen, its attacks are more effective on Mothra. In the 'base' levels, The Super X adopts a different tactic, and flies towards the player, shooting at them. When hit by the player, the Super X falls out of the sky and either disappears or explodes.

Like the Moonlight SY-3, the larger fighter jets, and Moguera's beams, the Super X is colored differently based on which monster the player is currently using. The Super X is blue when Godzilla is used, and gold if Mothra is used.

The Super X was constructed to fight the many monsters invading the Earth after the 1999 landing of Kamacuras. 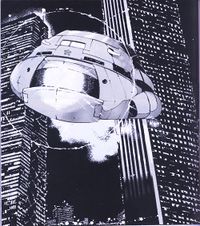 The Super X in The Return of Godzilla manga

The Super X appears in the manga adaptation of The Return of Godzilla, mirroring its role in the film. It is destroyed in midair by a building knocked over by Godzilla, rather than perishing after damage from his atomic ray forces it to land.

The Super X in Godzilla: Rulers of Earth #25

A tiny Super X appears on the cover of Godzilla: Rulers of Earth #3, though not in the story itself. It later appears in the final issue of the series, where it is seen along with several other Counter-Kaiju Reaction Forces weaponry, including the Gotengo, a Maser Cannon, and two ASTOL-MB93 Maser attack planes.

This is a list of references for Super X. These citations are used to identify the reliable sources on which this article is based. These references appear inside articles in the form of superscript numbers, which look like this: [1]

34 months ago
Score 1
I can easily tell this thing will be in Godzilla: King of the Monsters.
Permalink
You are ignoring the author of this comment
Show comment | Manage ignore list

34 months ago
Score 4
Um, how exactly? There's been absolutely no hint at it or anything like it, and it seems a little bit beyond the technology humanity is shown to possess so far in the MonsterVerse.
Permalink
You are ignoring the author of this comment
Show comment | Manage ignore list

34 months ago
Score 1
I think that it will because the MonsterVerse is possibly a second version of the Heisei series. I know humanity doesn't have that kind of technology, but maybe after Godzilla (2014), humanity had created more advanced technology to assist Godzilla and take down larger threats.
Permalink
You are ignoring the author of this comment
Show comment | Manage ignore list

34 months ago
Score 4
Don't wanna come across as rude or anything, but how is the MonsterVerse like a second Heisei series? I don't really see the connection.
Permalink
You are ignoring the author of this comment
Show comment | Manage ignore list

34 months ago
Score 1
I don't know. I just thought for a long time and I realised it. I don't see it either. But I think the Super X should make it's glorious return to Godzilla films in this one. What do you guys think? If it's not the Super X, then what should it be? The Gotengo?
Permalink
You are ignoring the author of this comment
Show comment | Manage ignore list

18 months ago
Score 0
Not in, however, we got a new vehicle, the Argo .
Permalink
↑ back to top ・ contents
Retrieved from "https://wikizilla.org/w/index.php?title=Super_X&oldid=181179"
Categories: