The Gohten (轟天,   Gōten) is a drill-nosed spaceship which first appeared in the 1977 Toho film, The War in Space. It is based on the Gotengo from Atragon.

The Gohten's name comes from the Gotengo, omitting the "gō" suffix which serves to designate the craft as a type of ship. As such, the Gohten's name may be literally translated as simply "Roaring Heavens" in English. Its name is distinguished from that of the Gotengo's in English by its romanization of the long "o" sound in gō as "oh." This name appears on the uniforms of the ship's crew in the film as well as on official merchandise as recent as the Toho SFX Movies Authentic Visual Books. The "gō" is also omitted from the name of the Gotengo in GODZILLA: Monster Apocalypse, however in this novel the craft is more reminiscent of the Gotengo featured in Atragon than the Gohten. The Gohten is sometimes given the full designation UNSF Gohten, which stands for "United Nations Space Force Gohten."

The War in Space

The Gohten is the flagship of the human fleet. After a vicious battle against the Messiah 13 aliens around the spaceship's base, it travels to Venus. Afterwards, it travels across the planet in search of the Alien base. 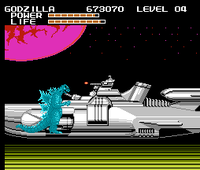 Godzilla and the Gohten in Godzilla: Monster of Monsters!

In this side-scrolling game produced for the NES, the Gohten is one of several opponents the player has a chance of fighting in Hyperspace areas of each level. The Gohten will fire upon the player using its various cannons, but will otherwise stay stationary. The player can choose to destroy the Gohten by attacking its cannons, or simply walk to the right and leave the Hyperspace area.

The War in Space

This is a list of references for Gohten. These citations are used to identify the reliable sources on which this article is based. These references appear inside articles in the form of superscript numbers, which look like this: [1]


↑ back to top ・ contents
Retrieved from "http://wikizilla.org/w/index.php?title=Gohten&oldid=174182"
Categories: