The M270 Multiple Launch Rocket System is a ground-based multi-rocket launch system in use by the U.S. and many allied countries. It has appeared in several kaiju films and TV shows.

In 1998, the M270 model was sent to New York to aid in the destruction of a giant monster dubbed Godzilla that had attacked the city. Since Godzilla was attracted to tuna, the military used large amounts of fish to draw the monster into Flatiron Square. After the manholes were removed from the street, Godzilla came out of hiding and emerged from underground. Once Godzilla approached the pile of fish and started to eat it, the military gave orders to commence fire, and a number of tanks and at least one M270 fired at the creature. Godzilla ducked and evaded the rockets, destroying a building, and started to flee. The only vehicles that could follow it were the AH-64 Apaches, making the M270 useless. A second attempt to destroy Godzlla was undertaken at Central Park. The monster smelled the tuna laid out for it and was lured once again. This time, Godzilla wasn't fooled and the military was forced to fire. Godzilla managed to flee into the water, running through a long blockade of tanks and MLRS units, where the navy was ready. Later, when Godzilla was trapped in the cables of the Brooklyn Bridge, more MLRS and tanks were sent just when the monster died. 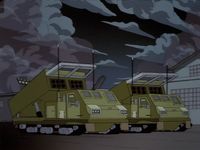 An M270 MLRS participated in the U.S. Army's first attack on Clover in New York City. It was presumably destroyed when the monster retaliated.

A M270 MLRS in Shin Godzilla

Multiple M270 MLRS contributed their firepower to a massive JSDF assault on Godzilla as he approached the Tama River. After they proved ineffective, the military shifted to an aerial assault.