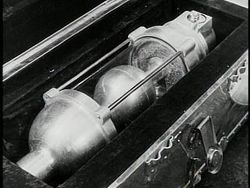 Daisuke Serizawa's research into micro-oxygen ultimately resulted in the production of a single Oxygen Destroyer.

Micro-Oxygen (ミクロオキシゲン,   Mikuro Okishigen) is a powerful fictional chemical compound which is presumably created from the atmospheric elemental gas oxygen. It is a major ingredient of the deadly Oxygen Destroyer.

While not mentioned by name in Godzilla, it is explained that Micro-Oxygen's most powerful attribute is its corrosive properties, being able to reduce almost any living organism down to a skeleton in minutes. The properties of Micro-Oxygen are expanded upon in Godzilla vs. Destoroyah, where Kensaku Ijuin's experiments reveal that Micro-Oxygen has the power to create as well as destroy. Ijuin discovered that small amounts of concentrated Micro-Oxygen made fish grow larger, and with this information he intended to market the chemical as a product to solve the world's hunger problem.

Daisuke Serizawa unintentionally developed a device called the Oxygen Destroyer while studying and experimenting with oxygen. Serizawa presumably discovered and experimented with micro-oxygen during this process, however the substance is never mentioned by name or alluded to in the film.

42 years after the events of 1954, physicist Kensaku Ijuin rediscovered the chemical compound used in the Oxygen Destroyer through his own experiments, dubbing it Micro-Oxygen and intending to use it to benefit humanity. Ijuin said that micro-oxygen could allow deep-sea divers to use lighter tanks that contain more oxygen, and an experiment showed that any fish raised in water containing micro-oxygen would grow much larger than normal fish, potentially alleviating the world's hunger problem. Ijuin admitted that micro-oxygen atoms were capable of penetrating any material and unleashing large amounts of energy, and would make a very effective weapon despite not being intended for the purpose. Yukari Yamane, heeding a warning from her aunt Emiko, asked Ijuin if he was aware that micro-oxygen was very similar to Daisuke Seizawa's Oxygen Destroyer. Ijuin stated that he consulted some of Serizawa's surviving work during his experiments, but never intended to recreate the Oxygen Destroyer, because his studies performed on the underwater soil where the Oxygen Destroyer was fired revealed that it could have reduced Tokyo to a graveyard if used on land. Kenkichi Yamane approached Ijuin and asked him to use micro-oxygen to re-invent the Oxygen Destroyer, believing it was the only way to destroy Godzilla before he could destroy the world. However, Ijuin had already discovered that the Oxygen Destroyer mutated several prehistoric crustaceans in Tokyo Bay in 1954, and that these creatures had evolved abnormally to manipulate micro-oxygen within their own bodies. Hoping to stop the creatures, Ijuin ran more experiments with micro-oxygen and discovered that it liquefied at low temperatures and was rendered ineffective. Ijuin urged the military to use freezer weapons against the creatures, as it should neutralize the micro-oxygen in their bodies and kill them. However, the creatures combined together into a single giant monster, and the chemical composition of their bodies changed once more. Ijuin noted that the creatures had become the living Oxygen Destroyer, dubbing it "Destoroyah."

7 months ago
Score 0
It destroyed the body of a god, not the soul.
Permalink
You are ignoring the author of this comment
Show comment | Manage ignore list

25 months ago
Score 0
Thank God these aren't sold on Amazon.
Permalink
↑ back to top ・ contents
Retrieved from "http://wikizilla.org/w/index.php?title=Micro-Oxygen&oldid=155780"
Categories: