The UH-1 Iroquois, nicknamed the "Huey," is an American utility military helicopter produced by Bell Helicopter and introduced in 1959. Though retired by the U.S. military in 2016 in favour of the upgraded UH-1Y Super Huey variant, the Fuji UH-1J Iroquois variant, built under license by Fuji Heavy Industries, continues to see use with the Japanese Self-Defense Force. It has become a staple of American and Japanese giant monster films since 1976. Numerous civilian versions of the UH-1 Iroquois, such as the Bell 212 and 205, have appeared in monster films as well.

After King Kong scaled the World Trade Center's South Tower and jumped across to the North Tower to escape soldiers who had pursued him with flamethrowers, a fleet of UH-1H Iroquois armed with miniguns were sent to confront him. Sensing his end was near, Kong set his captive Dwan down onto the roof and roared at the oncoming helicopters. After Kong eliminated the soldiers by throwing tanks of explosive fuel at them from the roof of the North Tower, the choppers opened fire at Kong, wounding him severely with their bullets. Kong fought back and destroyed two choppers with his fists, but the gunfire proved too much for Kong and he collapsed on the roof. Kong looked at Dwan one last time before rolling off the roof of the North Tower and plummeting to the plaza below, where his heart stopped and he was presumed dead.

In this film, numerous UH-1Js were used to transport JSDF soldiers. Another UH-1J was used to rescue Doctor Hayashida from a nuclear power plant.

A UH-1J Iroquois of the JASDF in Godzilla vs. Destoroyah

Alongside a Kawasaki P-3C Orion and a Hatsuyuki-class destroyer, a UH-1J Iroquois sighted Burning Godzilla off the coast of Okinawa. The helicopter was used as an initial scout for the other two elements of the mission.

In 1998, the U.S. military dispatched a team of scientists and soldiers to Central America to investigate to a series of strange shipwreck-related incidents that had just recently occurred there. Operating in Panama and then in Jamaica, and using cars and helicopters, primarily UH-1H Iroquois, the search team followed a trail of giant footprints, their only clues relating to the incidents. Not long later, a giant lizard called Godzilla appeared in New York. After the monster disappeared, many helicopters, among them the UH-1Hs, attempted to search for the monster, who had burrowed underground. 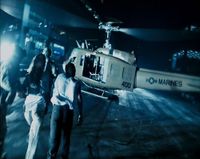 A UH-1H Iroquois in Cloverfield

After learning about the military's plans to initiate the Hammer-Down Protocol to destroy Clover, Rob, Hud, Lily, and Marlena journey through the streets of New York to reach an evacuation center. After rescuing Beth along the way, they arrive to find a lone UH-1H Iroquois piloted by a single U.S.M.C. soldier, the last of the fleet deployed to assist in the evacuation. Getting aboard the helicopter, the protagonists escape New York right as a B-2 Spirit arrives to bomb Clover, who staggers for a moment and appears to suffer pain from the attack. Unfortunately, the pilot made a mistake in flying directly towards Clover, who had survived the bombing attempt. A single strike from one of the monster's colossal limbs was enough to send the helicopter into a downward spiral, and it crash landed in Central Park.

In this film, numerous UH-1Hs appear in several scenes, where they can be seen escorting the military and carrying out evacuations. Additional Iroquois were present on the deck of the USS Saratoga.

A UH-1H Iroquois being destroyed by King Kong in Kong: Skull Island

A fleet of UH-1Hs took part in the mapping expedition to Skull Island. The bombs they were dropping to map the island had woken several Skull Crawlers, attracting the ire of Kong. Kong attacked the helicopters, throwing a tree through one and grabbing and throwing the others to the ground, suffering a painful cut to his hand after he touched one of the gunships' rotor blades. One of the downed helicopters landed on a Sker Buffalo, who was later freed by Kong.

In this game, UH-1J Iroquois are the standard-issue helicopters of G-Force, and spawn primarily on Disaster Level 1 and 2, being supplemented in the latter by F-16 Fighting Falcon fighter jets. Less UH-1Js appear on subsequent levels, having been replaced by additional F-16s and later, ASTOL-MB93 Maser Aircraft.

This is a list of references for UH-1 Iroquois. These citations are used to identify the reliable sources on which this article is based. These references appear inside articles in the form of superscript numbers, which look like this: [1]


↑ back to top ・ contents
Retrieved from "http://wikizilla.org/w/index.php?title=UH-1_Iroquois&oldid=174105"
Categories: