A Mitsubishi F-15J in Godzilla vs. Biollante

Although Godzilla had successfully been injected with the Anti Nuclear Energy Bacteria, he seemed unaffected and began to menace a nuclear power plant at Wakasa Bay. The M6000 T.C. System and several MBT-MB92 Maser Cannons had also been placed there, and the JSDF enacted their plan to increase Godzilla's body temperature so the ANEB could take effect. The F15-Js were deployed to repel him alongside a fleet of AH-1 Cobras, but Godzilla ignored the military assault in his unceasing march towards the power plant. Suddenly, Biollante returned from space in a new form, obliterating most of the JSDF's ground forces and forcing the jets and helicopters to retreat.

Two Mitsubishi F-15Js in Gamera: Guardian of the Universe 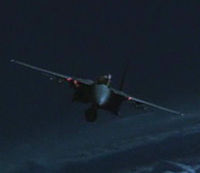 A Mitsubishi F-15J in Gamera 3: Revenge of Iris

After Iris began making his way to Kyoto in search of his adoptive mother Ayana Hirasaka, a fleet of F-15Js were sent to try and shoot him down before he could reach the city. Although unaffected by their weaponry, Iris retaliated against the jets and began attacking them, nearly killing the pilots. Suddenly, Gamera arrived, and protected the aircraft by distracting Iris, allowing the F-15Js to fly away to safety. Despite this, as a result of Gamera's 'attack' on Tokyo several days earlier, the aircraft was then ordered to shoot down Gamera and began firing on him with their missiles. After several successful missile hits, Gamera lost altitude and was forced to land, while Iris managed to escape.

As the Dimension Tide drifted above Earth, the J.A.S.D.F. flew the F-15Js in tandem with the GX-813 Griffon over the Pacific Ocean. Attempting to lure Godzilla towards the small island of Kiganjima, so that the Dimension Tide could defeat the monster for good, the F-15Js fired upon the ocean, forcing the angered beast to surface. The Griffon fired its Photon missiles at Godzilla, and the jets fired their infrared and RADAR missiles in tandem. Unfortunately, the jets were shot down by Godzilla's atomic breath, but the Griffon flew on and continued to drive Godzilla further through the blue waters.

This is a list of references for Mitsubishi F-15J. These citations are used to identify the reliable sources on which this article is based. These references appear inside articles in the form of superscript numbers, which look like this: [1]

↑ back to top ・ contents
Retrieved from "http://wikizilla.org/w/index.php?title=Mitsubishi_F-15J&oldid=171476"
Categories: