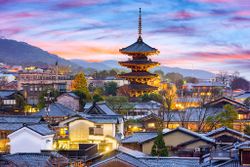 Kyoto (京都,   Kyōto) is a major city in Japan of the Kyoto Prefecture in the Kansai Region.

When a team of scientists discovered a Pteranodon nest on Adonoa Island, they decided to bring it to Kyoto for research. After seeing Rodan and witnessing his fight with Godzilla, they managed to board a helicopter and fly away in the confusion.

Back in Kyoto, Kazuma Aoki, a self-described "Pteranodon enthusiast," found out about the egg, and went down to the institute where Azusa Gojo was watching it. Much to Azusa's annoyance, he began taking pictures before reluctantly leaving. Azusa then discovered that the egg glowed red whenever she absent. Meanwhile, Aoki, having stolen a plant sample from the egg, encountered Miki Saegusa, who sensed strong psychic energy from the egg. After her students at the Psychic Development Center measured it, they discovered that its energy readings produced a strange melody. They took a tape of the music and brought it back to the institute where Azusa was. Upon playing it, it had a strange effect on the egg, causing it to hatch into a Godzillasaurus. Azusa named it BabyGodzilla, and Miki sensed Godzilla's approach.

Sure enough, Godzilla appeared and began heading straight for Kyoto. Mechagodzilla was deployed to stop him, and the two exchanged attacks before Godzilla was knocked down by Mechagodzilla's Plasma Grenade. Godzilla was then hit with Shock Anchor harpoons, but managed to reverse the current and damage Mechagodzilla. As Godzilla went about his rampage, the others realized he was being drawn to BabyGodzilla. They sealed him in a secure basement room, where Godzilla could not find him. He destroyed the top of the building, but returned to the ocean.

After Ayana Hirasaka was rescued from Iris' cocoon, she was taken to Kyoto by occultist Cabinet member Asakura and computer programmer Kurata in an attempt to summon Iris. Mayumi Nagamine and Asagi Kusanagi found her and attempted to get her out of the city. However, travel was stalled by a typhoon, while Iris landed to battle Gamera. Ayana submitted her will to Iris, who dodged several plasma blasts from Gamera.

As the two monsters engaged in hand-to-hand combat, Gamera was impaled by Iris, causing them both to crash into the train station, crushing Asakura and Kurata. Gamera was knocked to the ground, allowing Iris to absorb Ayana again, this time against her will. Inside Iris, Ayana saw the monster's memories of destroying her village. Meanwhile, Gamera used his elbow claw to cut into Iris' chest and grab Ayana. However, his other hand was impaled by Iris, who began to drain his blood in order to copy his attacks. Gamera quickly blasted off his own forearm in order to escape, before absorbing Iris' fireballs and plunging his flaming arm into the monster, causing it to explode.

An unconscious Ayana was then set down by Gamera, and Asagi and Nagamine attempted to revive her. Gamera let out a loud roar, awakening her. Gamera, weakened, left the station and prepared to battle the thousands of Hyper Gyaos converging on Japan. When Nagamine remarked that Gamera would continue fighting even if alone, Asagi replied that he was not alone.


↑ back to top ・ contents
Retrieved from "https://wikizilla.org/w/index.php?title=Kyoto&oldid=164225"
Categories: