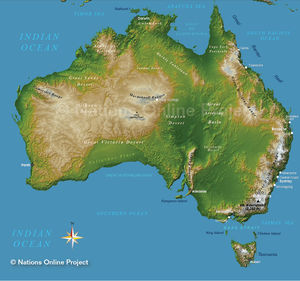 The Commonwealth of Australia is a country comprising the mainland of the Australian continent and some surrounding islands. Australia, specifically the capital city of New South Wales, Sydney, is featured in the 2004 Godzilla film, Godzilla: Final Wars.

Zilla was sent to attack Sydney, Australia under the command of the Xiliens. He destroyed many buildings and cars before suddenly disappearing along with all the other kaiju attacking other cities around the world. After the Xiliens' true intent was revealed, Zilla was redeployed to Sydney to battle Godzilla. Zilla jumped at Godzilla, who countered with his tail, sending Zilla flying into the Sydney Opera House. Godzilla then finished his enemy with a blast of his atomic breath.

Dagahra attacking Australia in GODZILLA: Planet of the Monsters

I’m from Australia but

24 months ago
Score 0
Aussie!
Permalink
↑ back to top ・ contents
Retrieved from "https://wikizilla.org/w/index.php?title=Australia&oldid=174717"
Categories: