A view of a street in Saradia from Godzilla vs. Biollante

Saradia's name is most likely a contraction of Saudi Arabia, a real country in the same region where Saradia is placed. It may also come from the word "arid," due to the nation's desert climate.

While the nation's English name is primarily given as "Saradia," it is pronounced Saladia by the Bio-Major agent John Lee and is spelled this way on the hardhat worn by the character Sirhan.

Unable to find government support for his experiments in Japan due to regulations, Genshiro Shiragami relocated to Saradia with his daughter Erika and began working at the bioengineering plant there. The plant's director, Abdul Zalman, while proud of Saradia's vast oil reserves, was aware that these reserves would not last forever. As a result, he wanted the country to become less dependent on oil and possess a sustainable food supply. Research conducted at the plant was primarily focused on engineering new crops capable of growing in the desert. Erika, a botanist, had even managed to successfully splice a strain of wheat with cactus DNA, allowing it to grow in the harsh desert climate. Zalman was also the head of the Saradian secret service, and used his power to order the agent SSS9 to retrieve a sample of Godzilla cells from Tokyo following the monster's 1984 attack. When the cells were brought to Saradia, Shiragami prepared to experiment with them, splicing their DNA with plants in order to make them immortal. However, the terrorist group Bio-Major, whose agents had been killed by SSS9 in order to retrieve the G-cells, bombed Shiragami's lab at the plant to sabotage his research, killing Erika in the process. Stricken with grief, Shiragami returned to Japan and took up residence at Lake Ashi.

In 1990, Zalman learned that Shiragami was helping the Japanese government use G-cells to engineer a new weapon known as the Anti-Nuclear Energy Bacteria (ANEB). Zalman sent SSS9 to retrieve the ANEB from Shiragami's lab, where he encountered Bio-Major agents John Lee and Michael Low, along with the result of Shiragami splicing the cells of his dead daughter with a rose and G-cells, the creature Biollante. Biollante attacked the agents, killing Low and forcing Lee and SSS9 to retreat. When Lee orchestrated a ransoming demanding the ANEB be handed over to him or else he would blow up Mount Mihara and release Godzilla, SSS9 sabotaged the negotiations and killed Lee with a sniper rifle before stealing the ANEB. SSS9 brought the ANEB to the Saradia Oil Corporation's office in Osaka, where it was prepared to be shipped back to Saradia. However, JSDF Colonel Goro Gondo and scientist Kazuhito Kirishima arrived at the office, overpowering Sirhan, the Saradian worker there, and retrieving the ANEB. After receiving word the ANEB was lost, Zalman ordered SSS9 to assassinate Shiragami and ensure no other nations could ever create the ANEB again. SSS9 obliged, sniping Shiragami after Godzilla and Biollante's final battle at Wakasa Bay. Kirishima attacked SSS9, but was overpowered and held at gunpoint. However, SSS9 was standing on an M6000 T.C. System pad, and was vaporized when Sho Kuroki activated the pad. 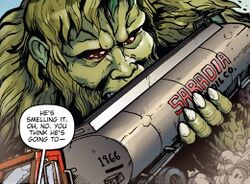 Saradia is referenced in Godzilla: Rulers of Earth, where in issue #10 a truck from the Saradia Oil Corporation can be seen. Sanda picks up the truck and slams it into Godzilla's face, causing it to explode.

Why does Toho include Saradia in Godzilla vs. Biollante if it isn't real?

/s
Permalink
↑ back to top ・ contents
Retrieved from "http://wikizilla.org/w/index.php?title=Saradia&oldid=156166"
Categories: