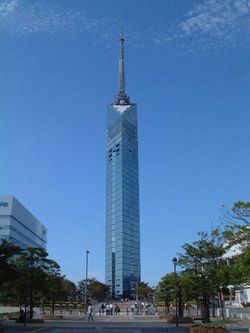 Fukuoka Tower is a skyscraper built in the Momochihama area of Fukuoka, Japan. It is the tallest skyscraper in the country that is built in a coastal region, and is built to withstand magnitude seven earthquakes.

When King Ghidorah attacks Fukuoka, Shindo and his colleagues are on the tower's top floor. They run back when the glass windows explode due to a supersonic boom created when King Ghidorah flies by.

Godzilla attacking the Fukuoka Tower in Godzilla vs. SpaceGodzilla

After SpaceGodzilla landed in Fukuoka, he planned to colonize Japan, then the rest of Earth using the city as a base of his evil plans. Using his powerful psychic capabilities to create an Energy source, he placed it into the tower, energizing every molecule of its concrete and glass frame. After Godzilla and M.O.G.U.E.R.A arrived in Fukuoka, it quickly became clear that they would have to destroy the tower to weaken SpaceGodzilla. M.O.G.U.E.R.A split into Land Moguera and Star Falcon, and Godzilla advanced on the tower. While Star Falcon distracted the cosmic kaiju from above, Land Moguera began to drill through the skyscraper's foundations, and Godzilla slammed into the tower using his powerful arms. The tower resisted Godzilla's blows for several moments, but eventually collapsed and eliminated SpaceGodzilla's energy source.


↑ back to top ・ contents
Retrieved from "https://wikizilla.org/w/index.php?title=Fukuoka_Tower&oldid=174671"
Categories: