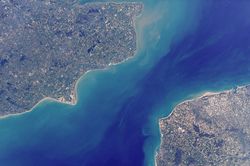 The Strait of Dover, the narrowest section of the English Channel. 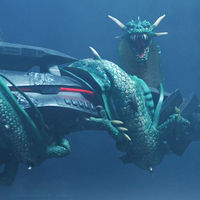 Manda battling the Gotengo in the English Channel in Godzilla: Final Wars

Swimming along the English Channel, the giant sea serpent Manda approached Normandy when he was confronted by the Gotengo. During the battle, the Gotengo lured Manda above an undersea volcano, where he was seemingly burned to death by the eruption. However, Manda survived, and burning red-hot, headed straight for the Gotengo. The Gotengo's captain, Douglas Gordon, used the ship's Absolute Zero cannon to freeze Manda solid, and then destroyed him by ramming him with the ship's drill nose, shattering the serpent into chunks of ice.


↑ back to top ・ contents
Retrieved from "http://wikizilla.org/w/index.php?title=English_Channel&oldid=155962"
Categories: