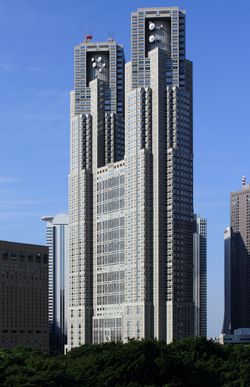 Emmy Kano confronted Godzilla while piloting Mecha-King Ghidorah as he rampaged through Tokyo's Shinjuku ward. Godzilla struck the top of the Tokyo Metropolitan Government Building's towers with his atomic breath while trying to hit the cyborg, then Mecha-King Ghidorah damaged it further while returning fire. After knocking Godzilla into another nearby building, Emmy aimed at one of the Tokyo Metropolitan Government Building's towers, severing it and dropping it onto Godzilla. The rest of that tower was destroyed when the two monsters barreled through it later in their battle.

The top of the Tokyo Metropolitan Government Building can be glimpsed in an establishing shot of the city.


↑ back to top ・ contents
Retrieved from "http://wikizilla.org/w/index.php?title=Tokyo_Metropolitan_Government_Building&oldid=155794"
Categories: