Upon the original site's completion in 1973, the World Trade Center's main buildings, WTC 1 and 2 quickly became highly praised examples of architecture, and as such the original site was featured in many films. The World Trade Center played a prominent role in the climax of the 1976 version of King Kong, and appears as a significant piece of scenery in various other kaiju films centered on New York.

In the final scene of the film, King Kong traveled towards the World Trade Center, as its two towers resemble a rock formation on Skull Island. Holding Dwan in his hand, he began scaling the South Tower (WTC 2) with Jack in pursuit. Once he reached the roof of the South Tower, he was repelled by soldiers on the roof carrying flamethrowers. He leapt between the South and North Tower, landing on the North Tower's roof. After ripping up and throwing pieces of the radio equipment at the soldiers, he threw a tank of flammable material at them, killing the men in a small explosion. A group of military Helicopters intercepted the Giant Ape, and King Kong fought them, destroying two of the helicopters. Unfortunately, the mounted machine guns of the remaining helicopters were too much for the primate to handle, and he grew weak from his injuries, falling off the tower and crushing the fountain at ground level. After hitting the ground, his heart stopped, and he died.

Although not physically appearing in the film, the World Trade Center is mentioned and seen in a flashback as it is explained that King Kong did not die after falling from the North Tower, but instead was seriously injured and fell into a decade-long coma.

The World Trade Center in GODZILLA (1998)

Throughout the film, the World Trade Center appears in background shots. When Godzilla first appeared in New York, many UH-1H Iroquois, AH-64 Apaches and F-18 Hornets are seen flying straight into New York, using WTC 1 & 2 as a pair of waypoints. A news reporter later states that Godzilla's attack on the city is the "worst thing to happen to the city since the 1993 World Trade Center bombings."

The World Trade Center appears as a backdrop in many episodes. The most significant role it played was in the episode Future Shock, in which the towers were destroyed in the D.R.A.G.M.A. infested future. Randy Hernandez remarks when he sees them that "It looks like somebody's been playing dominoes with the World Trade Center."

The World Trade Center is present during the final battle between Godzilla and King Ghidorah with one of the towers being dropped on Ghidorah after Godzilla is freed from his choking neck. 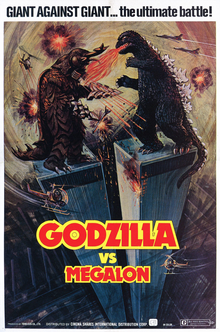 ↑ back to top ・ contents
Retrieved from "http://wikizilla.org/w/index.php?title=World_Trade_Center&oldid=146485"
Categories: