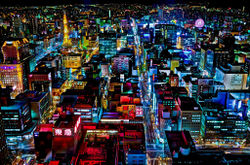 Sapporo (札幌) is the fourth largest city in Japan, and is capital of Hokkaido Prefecture. It is famous for having hosted the first Winter Olympics outside Europe in 1972, and is also well-known for its picturesque surroundings. Sapporo is featured in the 1991 Godzilla film, Godzilla vs. King Ghidorah, and briefly in Godzilla vs. SpaceGodzilla.

After defeating King Ghidorah and the Futurians, Godzilla began rampaging through Hokkaido, eventually reaching the city of Sapporo. Godzilla approached the Sapporo Tower, only to be confronted by two MBT-MB92 Maser Cannons under the command of the JSDF As Godzilla charged towards his aggressors, he fell through the street and became trapped, allowing the MBT-MB92s to relentlessly bombard him with Maser beams. Godzilla regained his footing and quickly obliterated the cannons with his atomic breath, then continued his rampage, eventually heading south.

By 1995, the Sapporo TV Tower had been rebuilt. SpaceGodzilla flew over Sapporo on his way to Fukuoka, causing arcade machines to malfunction.

↑ back to top ・ contents
Retrieved from "http://wikizilla.org/w/index.php?title=Sapporo&oldid=174265"
Categories: