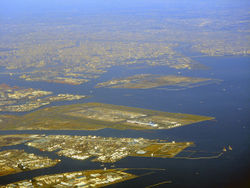 Haneda Airport would be the location of the JSDF's final stand against the prehistoric monster Varan. Conventional weaponry had proved completely ineffective up to this point, so a new explosive developed by Dr. Fujimura would be tried as a last hope. A truck loaded with the powerful explosive was driven into position by Kenji Uozaki. The weapon was detonated just as the young man made it to safety, but it still wasn't enough to halt the triphibian monster. Realizing the destructive force of the explosive would be maximized from inside, and upon watching Varan swallow flares as they plummeted toward earth, Professor Sugimoto suggested equipping the explosive on a flare, hoping the monster would swallow the weapon. A bomb was prepared as the JSDF held Varan in position with tactical airstrikes on the southern airfield. The flares were deployed and the JSDF held its fire as Varan swallowed two. The first charge exploded inside the monster's mouth. It crawled back to Tokyo Bay where, underwater, the second charge detonated, ending Varan's assault on the capital city.

Gaira attacks Haneda Airport in The War of the Gargantuas

Gaira abruptly came ashore on a cloudy day and terrorized Haneda airport. Gaira grabbed and ate several fleeing civilians, plunging Japan into a panic. When the sun finally broke through the clouds above, Gaira retreated back to the sea. Following the attack, the JSDF formulated a plan to use newly-developed Maser Cannons to kill the beast.

When Ichiro Miki dreamed of traveling to visit Monster Island, he departed via an airline from Haneda Airport.

Godzilla and Godzilla Junior reunite at Haneda Airport in Godzilla vs. Destoroyah

After defeating Destoroyah's aggregate form, Godzilla Junior reunited with Godzilla on the outskirts of Haneda Airport, near its terminals. As the monsters roared to each other, Destoroyah rose from a flaming refinery in its demonic final form, and began to fly towards the airport, bent on revenge. Destoroyah knocked Godzilla over with his Micro-Oxygen beam and grabbed Junior, carrying him high into the air. Destoroyah dropped Junior into Ariake Coliseum near the airport, then blasted the young monster with his beam, mortally wounding him. Destoroyah then landed on the runway and taunted Godzilla, who stormed at him in a fit of rage. After a brief skirmish, Destoroyah grabbed Godzilla by the neck with his tail pincers, taking flight and dragging Godzilla across the tarmac before loosening his grip and sending Godzilla flying into Tokyo Bay. After Godzilla came back ashore and temporarily defeated Destoroyah in downtown Tokyo, he returned to the airport and approached his fallen son. Godzilla attempted to breathe life back into Junior, who opened his eyes briefly before finally passing away. Godzilla roared in rage as his temperature continued to approach critical, when Destoroyah returned in his final form and attacked Godzilla, challenging him to a final battle. The battle continued to rage across the airport and into the surrounding area, with Destoroyah finally meeting his end from a combination of extreme temperatures from both Godzilla and the JSDF's freezer weapons, with Godzilla dying from his meltdown shortly afterwards.

↑ back to top ・ contents
Retrieved from "http://wikizilla.org/w/index.php?title=Haneda_Airport&oldid=155808"
Categories: