Godzilla and King Ghidorah face off in Boston.

After releasing King Ghidorah from Outpost 32 in Antarctica, Emma Russell, her daughter Madison, and Alan Jonah and his men set up their base of operations in an old Monarch bunker outside of Boston. It was here that Madison became disgusted by her mother's actions and decided to make things right herself. She stole the sonar device the Orca and made her way to Fenway Park, where civilians were being evacuated. Madison made her way to the pressbox, where she hooked up the Orca to the ballpark's sound system and broadcast a frequency that halted all of the newly-awakened Titans' rampages. Alerted to this frequency, King Ghidorah flew to Boston to eliminate it. He landed at Fenway Park and destroyed the stadium's loudspeakers before turning his attention to Madison. Madison ran from the three-headed monster's gravity beams with the Orca in hand, and made it out onto the field. However, Ghidorah now had her at his mercy. As Ghidorah charged his gravity beams, Madison defiantly threw the Orca away and braced herself, only for a blast of atomic breath to strike Ghidorah and knock him off his feet. Madison turned to see Godzilla arrive in the city flanked by a full military escort. Madison ran away as Godzilla and Ghidorah made Fenway their battlefield. Mothra soon arrived to back up Godzilla, using her silk attack to pin his heads to a skyscraper and allowing Godzilla to tackle him. Ghidorah summoned Rodan to his aid, who intercepted Mothra. Madison avoided Rodan and Mothra's aerial clash as she made her way to her family's old home in the city. Meanwhile, Emma left the bunker and made her way to Fenway to search for Madison, where she encountered her estranged husband Mark and the members of G-Team, also searching for Madison. She ordered them to get into her vehicle, and drove through the city in search of her daughter. Both parents realized Madison must have taken refuge in their old home and drove there, only to find it destroyed. However, they found Madison hiding inside a bathtub, unconscious. She regained consciousness and embraced her parents.

In the midst of this, the Titans' fight had taken a turn for the worse. Rodan badly burned Mothra's wings and pinned her to a skyscraper. As Rodan tried to stab Mothra with his beak, Mothra extended a stinger from her abdomen that impaled Rodan through the chest, immobilizing him and sending him plummeting to the fiery streets below. After absorbing electricity from a power substation, Ghidorah disoriented Godzilla by projecting lightning from his wings. He then grabbed and restrained Godzilla, flying into the atmosphere before dropping Godzilla from an incredible height. Godzilla crashed to the ground, helpless as Ghidorah closed in on him. However, the weakened Mothra crawled on top of Godzilla and roared at Ghidorah, defiantly spreading her wings before taking flight. Ghidorah promptly disintegrated her with his gravity beams, her ashes floating down onto Godzilla. Ghidorah wasted no time in biting down on Godzilla, draining his energy. Emma realized that they had to get Ghidorah away from Godzilla, and worked with Mark to repair the Orca, which was recovered damaged in the ruins of Fenway. An Osprey landed to take everyone back to the Argo, but Emma stayed behind to calibrate the Orca. When she finally activated it, it got Ghidorah's attention and drew him toward her. In order to buy time for the Osprey to escape, Emma took the Orca into her vehicle and began driving away with Ghidorah in pursuit, much to Madison's dismay. The beast destroyed Emma's vehicle with his gravity beams, leaving her dying on the street. However, Godzilla, now transformed into Burning Godzilla by Mothra's energy, emerged behind Ghidorah. He then emitted a nuclear pulse in the shape of Mothra's wings that incinerated Ghidorah's wings. Ghidorah reeled back and fired his gravity beams, which had no effect on Godzilla. Godzilla then launched another pulse that vaporized Ghidorah's left and right heads. Ghidorah fell onto his back, with Godzilla stepping on his chest before the energy inside him exploded forth. When the fust settled, Godzilla rose from the rubble, Ghidorah's last surviving head held in his mouth. Godzilla then incinerated the head with his atomic breath.

Though Ghidorah was vanquished, the Titans previously under his control soon surrounded Godzilla in the ruins of Boston. Rodan, still alive but with a massive wound in his chest, landed in front of Godzilla and roared at him. Godzilla returned a glare that made Rodan immediately back down and submit to Godzilla. The other Titans all followed suit; Methuselah, Scylla, Behemoth, and the Queen MUTO all "bowing" in their own way to the new King of the Monsters.

Boston appears as an arena in the game, with Fenway Park serving as a destructible landmark. A smaller portion of the city, Boston East, is also available as an arena. 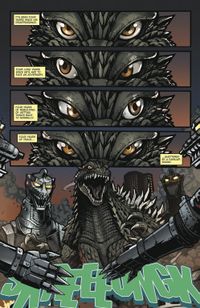 The Mechagodzillas surround Godzilla in Boston.

Steven Woods met with his old friend Allie in Boston to catch up, years after the two worked together to survive the initial appearance of the kaiju. However, Godzilla soon arrived in the city and began rampaging. To make matters worse, an army of mass-produced Mechagodzilla units was deployed in the city to fight him. Godzilla battled his robot duplicates, tearing them apart piece-by-piece with his colossal strength. As the battle turned in Godzilla's favor, Mecha-King Ghidorah arrived and restrained Godzilla with his capture cables and machine hand, then lifted him into the air and flew off toward Russia.

↑ back to top ・ contents
Retrieved from "http://wikizilla.org/w/index.php?title=Boston&oldid=171205"
Categories: