Gamera vs. Jiger (ガメラ対大魔獣ジャイガー,   Gamera tai Daimajū Jaigā, lit. Gamera vs. Giant Demon Beast Jiger) is a 1970 tokusatsu kaiju film produced by Daiei Motion Picture Company and the sixth entry in the Gamera series. It was released to Japanese theaters on March 21, 1970.

When a mysterious statue is removed from Wester Island, the giant demon beast known as Jiger appears and lays waste to Osaka. Gamera arrives to challenge Jiger, but finds himself infected by her parasitic young during the battle. Now, young boys Hiroshi and Tommy enter Gamera's body in order to save him while the JSDF tries to uncover the mystery of the statue and learn how to defeat Jiger.

Young Hiroshi Kitayama is excited to get to visit the site of Expo '70, since his sister's archaelologist boyfriend Keisuke Sawada works there. The two travel to the Expo site, where pavilions are set up by all major countries to show off advancements in science in the space age. Keisuke explains that the theme of the Expo is world unity, and says that will be on display throughout the event. Suddenly, Keisuke is called to his office, where the cultural envoy from Wester Island, Gibo, is arguing with Expo workers. Gibo insists that if the statue from his island, known as the Devil's Whistle, is moved, it will bring a great curse. Keisuke explains to Gibo that they intend to display the statue at the Expo to further examine the mystery of the sinking of the continent of Mu. Gibo becomes enraged, only shouting the name "Jiger," before storming out.

On Wester Island, Dr. Williams is overseeing the removal of the Devil's Whistle. Helicopters attach lines to the statue and begin pulling it out of the ground only for Gamera to show up and begin flying around the choppers, blocking them from moving. Gamera lands, and catches the statue in his hand as the helicopters try to fly away. Dr. Williams orders the guards to open fire on Gamera, which distracts him long enough for him to let go of the statue. Suddenly, an earthquake strikes the island and causes the nearby volcano to erupt, leading Gamera to fly to the crater to consume the lava. Unimpeded, the helicopters fly the Devil's Whistle to the Nankai-Maru and deposit it there.

Not long after, the monster Jiger emerges from underneath where the Devil's Whistle once stood. Still on the island to feed on the volcano, Gamera flies down to the ground to challenge Jiger. The two monsters fight, with Jiger throwing a boulder at Gamera and then using jets located on her head to lunge at him. Gamera manages to avoid Jiger's strikes and grabs her, flying her high into the air and dropping her back to the ground. Gamera swims back to the island and begins pummeling Jiger while she is down, but she launches needles from her head that pierce Gamera's limbs, causing him to fall onto his back, immobile. Her enemy disabled, Jiger uses her jets to swim quickly away from the island. At sea, a large ship witnesses Jiger swimming toward it but cannot escape as the monster strikes the ship and splits it in half.

Back in Osaka, Dr. Williams has arrived with his son Tommy and daughter Susan, who are friends of Hiroshi. They watch as the Devil's Whistle is unloaded from the Nankai-Maru by helicopters, as the crew had taken ill and were unable to move it themselves. Suddenly, they see Jiger swimming toward the ship and watch as she destroys it. Jiger leaps after the statue as the choppers carry it, but cannot reach it and instead lands in the middle of Osaka. Jiger begins rampaging as tanks and artillery open fire on her. She fires a beam from her face that obliterates the attacking forces, then uses the same beam to wipe out a large portion of the city. Back on Wester Island, Gamera manages to remove the needles from his limbs and quickly flies to Osaka to intercept Jiger. The two monsters battle again, with Gamera gaining the upper hand. Just as Gamera has Jiger at his mercy, she grabs him and stabs him in the shoulder with a stinger located on the tip of her tail. Gamera immediately retreats and collapses headfirst into the sea, his arm and head becoming an incredibly pale white.

The following morning, Jiger is asleep in Osaka while Gamera is still in a death-like state. Hiroshi and Tommy head to the Expo site where everyone is discussing what to do next. Hiroshi suggests they find a way to revive Gamera, to which the scientists respond by taking X-ray photographs of the monster. The X-rays reveal that Gamera is being parasitized by Jiger's offspring, his pale color a result of the larva drinking his blood. To make matters worse, Jiger attacks the Expo site and finds the Devil's Whistle, then chucks it into the sea. Hiroshi and Tommy steal a communicator and board one of the mini submarines Hiroshi's father built for the Expo, using it to enter Gamera's body. They contact everyone at the Expo and explain their mission, to find and root out the cause of Gamera's weakened state. They ride the sub to Gamera's lung, where they find the baby Jiger. The creature attacks them, prompting Hiroshi to throw his communicator at the creature. To his surprise, the creature writhes in agony. He grabs the communicator and throws it again, this time killing the baby Jiger. The parasitic larva defeated, the boys return to land.

Dr. Williams and the other scientists determine that Jiger is weak to low-frequency waves, as she instead projects high-frequency waves. Thus, the communicator was able to kill her offspring while the frequency given off as wind passed through the Devil's Whistle kept her at bay. If they could replicate the sound of the Devil's Whistle and play it to Jiger, they may be able to weaken her. The plan, Operation Speaker, is put into motion while another plan is set in action to revive Gamera. Wires are run from the local power plant into Gamera's heart, with electrical current being sent through it. Gamera regains his color and is revived, then flies to the Expo site to engage Jiger in a final battle.

While Jiger is kept at bay by an array of giant loudspeakers, she resumes activity when a blackout caused by Gamera's revival shorts out the speakers. Fortunately, Gamera arrives to battle her. The two monsters fight one final time, with Jiger using her ray against Gamera. The hhigh-frequency waves of Jiger's ray threaten to rupture Gamera;s eardrums, but he grabs two nearby power poles and shoves them into his ears. He then fights back against Jiger, avoiding her attempts to stab him again with her stinger and using a piece of debris to smash her tail until the stinger is dislodged. Gamera uses his flame breath to knock Jiger down, then flies into the ocean and retrieves the Devil's Whistle. He flies around Jiger, who tries leaping into the air to catch him unsuccessfully. As Jiger leaps at Gamera once more, he throws the statue which embeds itself into Jiger's skull. The beast falls to the ground and writhes before finally dying. Gamera then grabs Jiger's carcass and begins flying it back to Wester Island. Hiroshi and the others bid farwell to Gamera as he flies away.

Along with Gamera vs. Viras and Gamera: Super Monster, Gamera vs. Jiger was one of three Gamera movies not licensed by Sandy Frank Film Syndication in the 1980s.[4] In 2004, Retromedia released an unlicensed "special edition" of the American version of the film on a double feature with Monster from a Prehistoric Planet. The Japanese version has been released on DVD by Shout! Factory and Mill Creek Entertainment, as well as on Blu-ray by the latter. 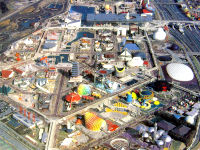 This is a list of references for Gamera vs. Jiger. These citations are used to identify the reliable sources on which this article is based. These references appear inside articles in the form of superscript numbers, which look like this: [1]

4 months ago
Score 1
would it be awesome if they made destroy all monsters but it was godzilla monsters vs gamera monsters?
Permalink
You are ignoring the author of this comment
Show comment | Manage ignore list

4 months ago
Score 0
how come Osaka Castle doesn't get destroyed? its right there.
Permalink
You are ignoring the author of this comment
Show comment | Manage ignore list

23 months ago
Score -2
worst Gamera movie ever too much expo 70 and too little Gamera plus guns can hurt Gamera?
Permalink
You are ignoring the author of this comment
Show comment | Manage ignore list

23 months ago
Score 0
At least it's not bad as Gamera: Super Monster. :)
Permalink
You are ignoring the author of this comment
Show comment | Manage ignore list

50 months ago
Score 0
I was worried a bit for Gamera in this movie!
Permalink
↑ back to top ・ contents
Retrieved from "http://wikizilla.org/w/index.php?title=Gamera_vs._Jiger&oldid=176475"
Categories: