Battle in Outer Space (宇宙大戦争,   Uchū Daisensō, lit. Great Space War) is 1959 tokusatsu film produced by Toho, and a loose sequel to The Mysterians. It was released to Japanese theaters on December 26, 1959 and to American theaters on July 8, 1960.

In the year 1965, the space station JSS-3 is attacked and destroyed by a trio of flying saucers. Around the world, an unknown force begins lifting objects into the sky, causing accidents. All the survivors of the events suffer from extreme frostbite. At a UN meeting, it is theorized that the attacks are of alien origin, and the frostbite is a result of them freezing the objects to reduce their gravitational pull. Meanwhile, a delegate exits the building and into a courtyard, and is abducted by a red light.

The delegate reappears, and attempts to sabotage the heat ray experiment at the meeting. He is caught before he can finish, and takes a hostage. He explains that Earth will become a colony of the planet Natarl before attempting to escape. A Natarl saucer soon appears and disintegrates him, leaving behind a radio transmitter which allows the UN to determine the aliens' location: the Moon.

Two rockets, called SPIPs, take off for the moon. They are attacked by remote controlled meteors, but they escape. A pilot of one of the SPIPs is caught trying to sabotage the ship's engines, but he is stopped. A warning is given to the SPIPs to not land on the moon, but it is ignored. The two ships land and find the Natarl base.

The mind controlled pilot breaks free of his ropes and blows up one of the SPIPs. Meanwhile, the Natarl base is discovered. One of the crew members is captured, but he is later freed. The group begins attacking the base, and blow it up. The mind-controlled pilot is freed, and stays behind on the moon for the others to escape. On Earth, the UN prepares for a final battle. They send up Scout Ships and Atomic Heat Cannons to attack. The Earth forces defend as long as they can, but some meteors break through and hit some cities. The Natarl mothership flies down and destroys Tokyo. The Atomic Heat Cannons manage to destroy it, ending the Natarl invasion. 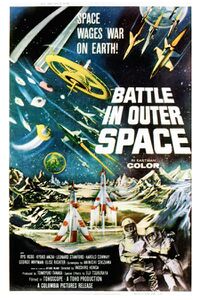 Battle in Outer Space was acquired by Columbia Pictures, dubbed into English by Bellucci Productions, and released in U.S. theaters on July 8, 1960. It was the first Toho science-fiction film to be released in the U.S. without any added or deleted footage, although Akira Ifukube's score was replaced with library music in several scenes.[1]

Unlike The H-Man and Mothra, the other two Toho titles distributed by Columbia, Battle in Outer Space never received a VHS release in the United States. It was finally released on the three-disc Icons of Sci-fi: Toho Collection DVD set by Sony in 2009, alongside The H-Man and Mothra, with Japanese and English language options.

This is a list of references for Battle in Outer Space. These citations are used to identify the reliable sources on which this article is based. These references appear inside articles in the form of superscript numbers, which look like this: [1]

3 months ago
Score 0
Don't ask why I have the main theme of this movie stuck in my head right now.
Permalink
You are ignoring the author of this comment
Show comment | Manage ignore list

23 months ago
Score 0
Of course the Blu-ray comes out a year after I upload a bunch of screenshots from the DVD.
Permalink
↑ back to top ・ contents
Retrieved from "http://wikizilla.org/w/index.php?title=Battle_in_Outer_Space&oldid=165756"
Categories: