The War of the Gargantuas (フランケンシュタインの怪獣 サンダ対ガイラ,   Furankenshutain no Kaijū Sanda tai Gaira, lit. Frankenstein's Monsters: Sanda Against Gaira) is a 1966 tokusatsu kaiju film co-produced by Toho and UPA and a loose sequel to Frankenstein vs. Baragon. It was released to Japanese theaters on July 31, 1966.

One night, a fishing boat in the waters just off Japan finds itself under attack by a Giant Octopus. Just before it can strangle one of the crewmembers to death with its tentacles, the monstrous cephalopod is attacked by a gigantic humanoid creature. After dispatching the Octopus, the giant begins violently attacking the boat and attempting to sink it. Sometime later, one surviving crewmember is being held in a hospital. Representatives try to get the story of how the ship sank from him, but he says in terror that the ship was sunk by Frankenstein. The mamritime authority is hesitant to believe that the ship was sunk by this "Gargantua," and dispatches divers to investigate the shipwreck. They uncover the clothes of all of the other four crew members, which are soaked in blood and look as though they were chewed up and spit out. Another boat soon falls victim to the Gargantua and a group of civilians finally witnesses the creature emerge from the water as they try and bring in a fishing net. The maritime authority contacts Frankenstein expert Dr. Paul Stewart in Kyoto to ask him if it is possible the Gargantua is the Frankenstein he raised at his institute. He dismisses the notion, stating Frankenstein died at Mount Fuji and would never live in the sea nor eat humans. Furthermore, reports of huge humanoid footprints in the Japanese Alps have led Stewart to investigate along with his assistant Akemi Togawa, while their collegue Dr. Yuzo Majida travels to investigate a salvaged shipwreck believed to be attacked by the Gargantua. Stewart and Akemi find the footprints in the mountains and accept the possibility they were left behind by Frankenstein, while MMajida finds a mucous membrane left behind on the shipwreck. Analysis of the membrane shows that the creature's cells are almost identical to Frankenstein's, and the JSDF determines that Frankenstein must be behind the attacks. On a cloudy day, the Gargantua comes ashore at Haneda Aiport and terrorizes the fleeing civilians. When the sun peeks through the clouds, the Gargantua immediately runs back to the sea, which Majida determines must mean the monster is averse to bright lights. The three scientists attend a conference in Tokyo to discuss countermeasures, but Stewart is still of the belief that the Gargantua in the sea and Frankenstein are different individuals.

That night, the Gargantua comes ashore in Tokyo and menaces a lounge singer before making his way into the countryside. The JSDF approves Operation L, a plan to use electromagnetic weapons including the newly-developed Type 66 Maser Cannon to kill the Gargantua. The plan is carried out, with electrical tripwires firing at the monster's legs before the Masers unleash their electromagnetic rays on the Gargantua. The beast tries to retreat to a river, but finds the water electrified. Just as the JSDF has the Gargantua at their mercy, a brown Gargantua emerges from the forest and helps the other up. The brown Gargantua waves off the JSDF and helps his green counterpart to safety. Stewart and Akemi conclude that the brown Gargantua, designated "Sanda" by the JSDF, is the kindly Frankenstein they raised. Analysis of tissue recovered from the green Gargantua, Gaira, shows his cells are identical to Sanda's. Majida proposes that the two Gargantuas are brothers, with Stewart saying the analogy is not far off. He proposes that when Sanda escaped their lab and went to Lake Biwa, some of his flesh tore off on a rock and grew into Gaira. While the kindly Sanda grew up in the mountains and was raised lovingly by Akemi, Gaira grew up in the dark depths of the ocean and became a hateful, violent beast. Stewart says the Gargantuas are more like clones than brothers, and determines that any attack against them runs the risk of spreading their cells which could then regenerate into more Gargantuas.

Sanda has taken his brother to the mountains around Mt. Fuji where he helps tend to his wounds. Akemi and Stewart head to the area to look for the Gargantuas, but come face-to-face with Gaira as he menaces a group of hikers. As Akemi and Stewart flee, Akemi falls over the side of a cliff and hangs on a tree branch for dear life. Before she falls into the rocky rapids below, Sanda hears her screams and rescues her, breaking his leg in the process. Akemi is overjoyed that Sanda recognizes her, and watches as he limps away. When Sanda returns to Gaira, he finds his brother sleeping next to the bloody clothes of the hikers he attacked. Sanda is horrified at the revelation his brother preys upon innocent humans and strikes him with a tree in rage. Gaira awakens and the two Gargantuas battle, with Gaira running away and Sanda unable to give chase on account of his broken leg. Gaira storms through the Fuji area and retreats to the sea before the JSDF can carry out its plan to destroy the Gargantuas. Most troubling is that Gaira seems to have lost his aversion to light, meaning he could attack Tokyo again. This comes to pass as Gaira enters the city once again, with Sanda converging on his location. The JSDF approves plans to attack both Gargantuas despite Stewarts protests. Akemi runs into the city streets to find Sanda and warn him to leave, with Stewart accompanying her. The two are soon menaced by Gaira, who grabs Akemi in his clutches. Fortunately, Sanda arrives and prompts Gaira to drop Akemi. Sanda tries to reason with his brother to end this senseless violence, but Gaira retaliates like a cornored animal and attacks his brother. Sanda continues fruitlessly pleading with Gaira, who continues lashing out. finally, Sanda accepts that his brother cannot be saved and fights back. The JSDF opens fire on Gaira as the war of the Gargantuas moves toward the port, their Maser Cannons sustaining fire on the green Gargantua. Both monsters fall into Tokyo Bay and continue their duel, gradually moving into the open sea. Planes drop bombs on the battling Gargantuas, but this activates an undersea volcano which begins to erupt. Both Sanda and Gaira continue to fight as they vanish amid the massive eruption. Mmajida finds Stewart with Akemi at a hospital and reports that both Sanda and Gaira appear to have perished in the eruption, though neither's death could be confirmed. Akemi is heartbroken at the loss of Sanda, who gave his life to defend humanity.

Toho originally planned to produce a direct sequel to the 1965 film Frankenstein vs. Baragon, which was directed by Ishiro Honda. Honda, who was signed on to direct the follow-up, felt that the film would work better as a standalone independent story, and so it was decided to write the film as independent from the previous film.[1] The film's story was rooted in the ancient Japanese myth Umihiko Yamahiko. While the Gargantuas are technically clones created from cell division, they are deliberately referred to as "brothers" and not father and son. In the script, neither of the Gargantuas are named, they are only referred to as "Mountain Frankenstein" and "Sea Frankenstein." The first draft of the script was titled The Frankenstein Brothers (フランケンシュタインの兄弟,   Furankenshutain no Kyōdai);[2] later titles included Strife of Frankenstein (フランケンシュタインの斗争,   Furankenshutain no Tōsō) and Duel of the Frankensteins (フランケンシュタインの決闘,   Furankenshutain no Kettō).[2][3] In a July 28, 1965 publication of Variety, the film was announced under the working title The Two Frankensteins.[4] The script did not include the Maser Cannons,[2] but Honda decided to add them to the film as he felt they would add to the dramatic atmosphere. Tohl Narita, later famous for his work on Tsuburaya Productions' Ultra Series and Mighty Jack, was in charge of monster design for the film.

Main article: The War of the Gargantuas/Gallery.

Main article: The War of the Gargantuas (Soundtrack). 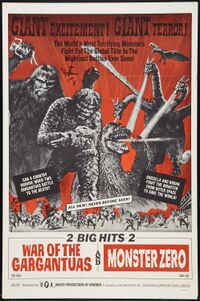 The War of the Gargantuas was released in the United States by Maron Films in 1970 as part of a double-bill with Monster Zero. Dialogue was dubbed to English. All mentions of "Frankenstein" were removed, and Sanda and Gaira were simply referred to as "Brown Gargantua" and "Green Gargantua," respectively. The U.S. version contains nearly ten minutes of alternative and extended footage filmed at Toho in agreement with UPA and Henry G. Saperstein, some of which serves to establish Russ Tamblyn's character earlier in the film's story. The film's music score was altered significantly, with all pieces containing Akira Ifukube's "Operation L" leitmotif replaced with a library track by American composer Philip Green entitled "Terror Hunt," or other pieces from the film. In addition, cues from Monster Zero were also supplemented.

Toho also commissioned an international English export dub for the film, recorded in Hong Kong. It remained obscure for decades, with its only known release being a Greek VHS, until Janus Films made it available to stream via STARZ and FilmStruck in 2017. The Greek VHS includes the English visuals created for the export dub, while the STARZ/FilmStruck stream is synchronized to the Japanese version of the film. While FilmStruck closed in 2018, it remains available on STARZ and The Criterion Channel.

This is a list of references for The War of the Gargantuas. These citations are used to identify the reliable sources on which this article is based. These references appear inside articles in the form of superscript numbers, which look like this: [1]

4 months ago
Score 0
I watched this for the first time today, with the English dub, and I thought it was just okayish. It felt kinda slow, though I wouldn't call it bad. Neither the characters or the fight at the end really compelled me to watch, as I thought the film was lacking in both areas. Maybe it's just a result of the English dubbing changing some scenes and dialogue around, but the Gargantuas themselves felt really generic to me. Their characters basically boiled down to one being violent and one not being violent, conveying their few emotions through their body movements. I did like seeing the green Gargantua eat somebody, given how rarely that happened in these older movies. If I had to pick a favourite, it would have to be the brown Gargantua as both his character and backstory was more defined. All we knew about the green one was that he came out of the ocean and was aggressive. I just feel like more effort could've gone into their characterisation considering the film held off from having them fight until the last 10 minutes. I much prefer Frankenstein vs. Baragon.
Permalink
You are ignoring the author of this comment
Show comment | Manage ignore list

20 months ago
Score 0
Did anyone else watch the American version of War Of The Gargantuas first and get confused by how they make no relations to Frankenstein vs. Baragon? I sure did.
Permalink
↑ back to top ・ contents
Retrieved from "http://wikizilla.org/w/index.php?title=The_War_of_the_Gargantuas&oldid=156662"
Categories: