Following a chain of volcanic eruptions that spreads all the way to Mount Fuji, Gamera returns to Japan to feed on the molten magma. In addition, the eruptions awaken the monstrous winged Gyaos from its sleep under Mount Futago. The beast terrorizes the nearby village before moving on to Nagoya, with Gamera in pursuit. With humanity powerless to stop Gyaos, it's up to Gamera to defeat the man-eating terror.

A chain of earthquakes and seismic activity across Japan causes Mount Fuji to erupt. The eruption lures Gamera, who lands in the mouth of the volcano and consumes the molten lava. A team of United Nations scientists travel to the Mt. Fuji area in a helicopter to investigate the seismic activity, and notice a bizarre green glow emanating from a cavern. Suddenly, a yellow laser shoots out of the cavern and slices the helicopter in half, killing everyone aboard. Experts cannot determine what destroyed the chopper, but believe it had nothing to do with Gamera or the eruption of Mt. Fuji. Amidst this confusion, foreman Shiro Tsutsumi is ordered by his superiors at Express Engineering Corp. to resume construction of a highway in the area. Unfortunately, local villagers are obstructing and sabotaging the efforts of Tsutsumi's crew, believing they can receive a greater selling price for their land by doing so. During a standoff between Tsutsumi's crew and several villagers, a reporter named Okabe sneaks into the village to get a glimpse of the mysterious green glow. He is caught snooping about by Eiichi Kanamura, the grandson of Tatsuemon Kanamura, the village elder. Okabe convinces Eiichi to guide him into the cavern so he can get a scoop on the green glow. When they reach the cave, the ground begins to shake and the cave's ceiling begins to collapse. Okabe ditches Eiichi and runs out of the cave, but is caught in the grasp of a huge bat-like creature, which promptly eats him whole. The creature turns its attention to Eiichi and grabs him, but Gamera arrives and attacks the monster. The monster spits a laser from its mouth, which cuts through Gamera's flesh and nearly slices his arm off. Gamera recedes into his shell and rolls down a hill, slamming into his enemy and causing it to drop Eiichi, who Gamera catches in his hand. Gamera places Eiichi onto his back and flies to the village, where he releases Eiichi safe and sound before flying away.

The JSDF meets to discuss countermeasures against the new monster, which Eiichi names "Gyaos," but the creature easily shoots down a squadron of fighter jets when they fly over his lair using its laser, which scientists determine to be an incredibly high-frequency sonic beam. The JSDF calls of the attack, but that night Gyaos emerges and feeds on local livestock. After learning that Gyaos is a nocturnal creature, the JSDF sets up bright lights all around the village, while Tsutsumi keeps watch from the construction crew's base of operations. When Gyaos still comes out of its lair that night, Tsutsumi fires a flare to warn the village. The JSDF attacks Gyaos, but their forces are decimated and the beast takes flight and heads for Nagoya. Gyaos terrorizes the city, destroying a train and eating the helpless passengers. As Gyaos flies over the city, Gamera appears in the sky, having healed from his previous encounter with the fiendish beast. Gamera tries to ram into Gyaos in the air, but Gyaos emits a yellow powder that extinguishes Gamera's flame and causes him to fall into the ocean. Gyaos flies over the ocean, but Gamera erupts from the water and bites down on Gyaos' foot. As the sun begins to rise, Gyaos desperately severs his own foot so he can escape before the sun rises completely. The next morning, Gyaos' severed foot is discovered and brought into a laboratory for study. Scientists learn that sunlight eats away at Gyaos' flesh and is lethal to the creature. The JSDF formulates a new anti-Gyaos plan: because Gyaos feeds on human blood, they will fill a giant bowl with artificial blood and place it above a giant turntable located on top of a hotel in the village near Gyaos' lair. When Gyaos lands on the turntable to feed, it will begin to spin rapidly and hopefully render Gyaos so dizzy he cannot fly away when the sun rises. While the plan is put into action, Gyaos regenerates its severed foot while resting in its cave.

Once the trap is set just an hour before sunrise, Gyaos emerges from his cave and lands on the turntable to drink the artificial blood. The device begins spinning rapidly, rendering Gyaos dizzy and unable to move. Just as the sun is rising, the turntable's motor gives out and explodes, triggering a fire at the nearby substation and causing the device to shut down. Gyaos regains his balance and extinguishes the fire with his vapor, then destroys the hotel in retaliation before returning to his lair. The next day, Express Engineering decides it is done dealing with Gyaos and the villagers and decides to reroute the highway. When the villagers learn about this, they are enraged and confront Kanamura at his home. Eiichi throws his toys at the mob of villagers and tells them to leave his grandfather alone and stop being greedy, then runs away crying. Eiichi's older sister Sumiko comforts him, and he tells her that all of this trouble would be over if Gamera returned to kill Gyaos once and for all. He says that since Gamera is drawn to fire and Gyaos hates it, a huge forest fire could bring Gamera there and lead to Gyaos' defeat. Kanamura overhears Eiichi and decides to propose his plan to the JSDF. Tsutsumi tells Kanamura and the JSDF that he will help put the plan into action, and will reroute the highway back through the village once this is all over. Trees in the forest around the village are chopped down and covered in gasoline, then ignited once Gyaos comes out of its cave. Gyaos tries to extinguish the flames, but Gamera sees them and lands for a final confrontation with his foe. Gyaos fires its sonic beam at Gamera, but he retracts into his shell, which protects him from the beam. Gyaos grabs Gamera while he is in his shell and continually carries him into the sky and throws him to the ground. After he becomes lodged in the side of a hill, Gamera grabs hold of a boulder and throws it into Gyaos' mouth, preventing him from using his sonic beam. Gamera grabs Gyaos and takes flight, carrying him to the summit of the active Mt. Fuji. Gamera bites down on Gyaos' neck and drags them both into the volcano's crater. Gyaos fires one last sonic beam into the air, then succumbs to the molten lava and burns to death. Gamera flies out of the crater and into the horizon, while Eiichi waves and calls after him. 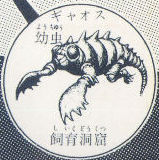 This is a list of references for Gamera vs. Gyaos. These citations are used to identify the reliable sources on which this article is based. These references appear inside articles in the form of superscript numbers, which look like this: [1]

My Thoughts: Gamera vs Gyaos

While "Gamera vs. Barugon" is my favorite film in the Showa Gamera series, "Gamera vs. Gyaos" comes in at a close second.

The main appeal this film has is its abundance of monster action: We get plenty of time with the new villain, as well as several battles between the two titular kaiju. The battle in the city in particular is really cool; aerial battles in movies like this are always an ambitious undertaking, and I think this one did it fairly well considering the film's likely budget.

The human characters are... pretty much the same stock characters you'd see in any other 60's kaiju film; ya got scientist, civilians and, of course, an obnoxious child character whose two purposes in the film are to be rescued by Gamera and to be generally irritating. Granted, I will admit the movie's resident Kenny, Eiichi, is probably one of the least aggravating child characters in the Gamera series. I mean, he's annoying to be sure, but he doesn't go out of his way to be an outright pain like the kid in the first film, so there's that.

Overall, "Gamera vs Gyaos" is one of the better balanced films of the original Gamera series; that is to say that while there is plenty of dull filler and irritating child pandering, it also has an abundance of the cool and wacky kaiju action we want to see.
Permalink
You are ignoring the author of this comment
Show comment | Manage ignore list

48 months ago
Score 1
One of my favorites. Gyaos is Gamera's King Ghidorah!
Permalink
↑ back to top ・ contents
Retrieved from "http://wikizilla.org/w/index.php?title=Gamera_vs._Gyaos&oldid=170641"
Categories: