For the 1996 film also titled "Mothra" in Japan, see Rebirth of Mothra.

Mothra (モスラ,   Mosura) is a 1961 tokusatsu kaiju film produced by Toho, and the first film to feature the character Mothra. It is an adaptation of the serial novel The Luminous Fairies and Mothra, published in Weekly Asahi earlier in 1961. The film was released to Japanese theaters on July 30, 1961.

In the waters off Infant Island, a presumably uninhabited site for Rolisican atomic tests, the Genyu Maru II is caught and run aground in the turbulence of a typhoon. A rescue party following the storm finds four sailors alive and strangely unafflicted with radiation sickness, which they attribute to the juice provided them by island natives. The story is broken by tenacious reporter Zenichiro the "Snapping Turtle" Fukuda and photographer Michi Hanamura, who infiltrate the hospital examining the survivors.

The Rolisican Embassy responds by co-sponsoring a joint Japanese–Rolisican scientific expedition to Infant Island, led by Rolisican businessman Clark Nelson. Also on the expedition are radiation specialist Dr. Harada, linguist Shinichi Chujo, and stowaway reporter Fukuda. There, the team discover a vast jungle of mutated flora, a fleetingly-glimpsed native tribe, and minuscule twin girls. These "Shobijin," as Fukuda calls them, wish their island to be spared further atomic testing. Acknowledging this message, the team returns and conceals these events from the public.

Nelson, however, returns to the island with a crew of henchmen and abducts the girls, gunning down several natives who try to save them. While Nelson profits off a "Secret Fairies Show" in Tokyo featuring the girls singing, both they and the island natives beseech their goddess Mothra, a giant egg, for help. Fukuda, Hanamura, and Chujo speak with the girls, who have learned Japanese through their telepathic ability; they express conviction that Mothra will come to their aid. Meanwhile, Fukuda's newspaper has accused Nelson of holding the girls against their will; Nelson denies the charge and threatens to file a libel suit against the paper. Meanwhile, the egg on Infant Island hatches to reveal a gigantic caterpillar, which begins swimming across the Pacific Ocean toward Japan. The caterpillar destroys a cruise ship and survives a napalm attack on a beeline path for Tokyo. The Rolisican Embassy, however, defends Nelson's property rights over the girls, ignoring any connection to the monster.

Mothra finally arrives on the Japanese mainland, impervious to the barrage of weaponry directed at her, ultimately building a cocoon in the ruins of the Tokyo Tower. Public feeling turns against Nelson, and he is ordered to release the girls. He flees incognito to Rolisica, where Mothra, now in her imago stage, immediately resumes her search. Police scour Rolisican capital New Kirk City for Nelson as Mothra lays waste to the metropolis. Ultimately Nelson is killed in a shootout with police, and the girls are assigned to Chujo's care. Observing a religious significance in Mothra's unique symbol, which resembles the Christian cross, Chujo hits upon a novel way to attract Mothra to an airport runway. The girls are returned amid salutations of "sayōnara," and Mothra flies back to Infant Island.

According to producer Tomoyuki Tanaka, the first draft of what became Mothra was written by Iwao Mori about half a year before production began. The reasoning behind the draft was to create a giant monster movie women would want to see. Tanaka was introduced to writer Shinichiro Nakamura by literary artist Hideyuki Shino, and asked him along with Takehiro Fukanaga and Yoshie Hotta to expand the idea into a novel. The novel The Luminous Fairies and Mothra was serialized in Weekly Asahi beginning in January 1961, and became the basis for the film.

Originally, Mothra was to build her cocoon on the National Diet Building, but Tanaka rejected the idea and the monster's cocoon was instead built on the Tokyo Tower. The idea of Mothra cocooning on the Diet Building was eventually realized in the 1992 film Godzilla vs. Mothra. The film was initially titled Giant Monster Mothra during production and romanized as Mosla on early Japanese speed posters.

Mothra featured the most detailed miniature work of any Toho tokusatsu production to that point, even more sophisticated than that of Godzilla and Rodan. The Ome Kaido, Dogenzaka, and Shibuya neighborhoods that Mothra overruns in her larval stage were reproduced in elaborate 1/20 scale miniatures that were identical to the real locations.

The film was originally supposed to feature American scenes due to a contract between Toho and Columbia Pictures, although the United States was replaced by the similar country of Rolisica in the final film. Due to budget constraints and a number of delays, Toho chose to have the entire film set in Japan and changed the ending so that Clark Nelson escapes with the Shobijin to Takachihonomine instead of his home country of Rolisica. Director Ishiro Honda was hesitant to accept the change, but Toho could not wait for a reply from Columbia and Honda traveled to Kagoshima for two weeks to complete shooting. When shooting in Kagoshima on the island of Kyushu, the staff used a life-sized doll to depict Clark Nelson to depict him falling to his death from Takachihonomine. A mountain climber who found the doll at a later date misunderstood it as a real body and assumed it was a suicide and reported it to authorities, who even sent rescue teams to the mountain. Columbia later objected to the revised ending as a breach of contract, and so Toho reverted to the original envisioned ending set in New Kirk City and the ending was filmed again. According to Honda, the footage shot in Kagoshima was never developed. Toho used library footage of California in its possession to represent the scenery of New Kirk City, and the special effects staff had to quickly build miniatures for the city. Despite the sudden added workload, the staff responded by building elaborate urban miniatures and executing impressive special effects sequences such as winds generated by Mothra shattering windows and plunging a vehicle into a store. Honda said the budget for filming the finale was low, and as such some planned scenes were omitted. Actor Yasuhisa Tsutsumi, whose scene was cut due to the changed ending, was still credited as a "lumberjack" on the film's poster.

New Kirk City was initially named "New Wagon City," but assistant director Hiroshi Waryu pointed out that it sounded too similar to "Newark," a real city in the United States. Jerry Ito suggested the name "New Kirk City," which was subsequently adopted. 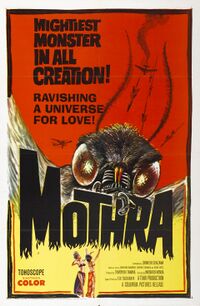 Poster for the American release of Mothra

Columbia Pictures distributed Mothra in the United States in a double bill with The Three Stooges in Orbit. Columbia removed about ten minutes of footage from the Japanese version of the film, the longest omission being the removal of the second Shobijin song, "Daughters of Infant Island." The English dialogue was dubbed by Titra Sound Studios in New York under the direction of Lee Kresel. Infant Island is referred to as "Beiru Island" in the English script, and Fukuda's "Snapping Turtle" nickname was localized as "Bulldog."

Columbia initially released Mothra on home videocassette in 1984, with a hi-fi audio reissue following in 1986. The company renewed its rights to the film in 1987 and retains its North American distribution rights to this day. In 1988, home video rights were sublicensed to GoodTimes Entertainment, who issued the film on cheaper LP mode tape with the Columbia logo removed. In 1992, Columbia restored Mothra for cable broadcasts and later released this restoration, which differed in several regards from the original theatrical and television cut, through Columbia/TriStar Home Video in 1995.[2] It later released the film on DVD through its parent company Sony Pictures Entertainment in 2009 in a set with its two other Toho tokusatsu films, The H-Man and Battle in Outer Space. The U.S. version was again restored to a presentation almost identical to the original theatrical cut. This set also included the Japanese cut of the film, marking the first time it was available officially in North America. Mill Creek Entertainment sublicensed the film in 2019 and released it on a special SteelBook Blu-ray. This release also included both the Japanese and American cuts of the film.

Mothra was a considerable critical and financial success in Japan. It launched the career of screenwriter Shinichi Sekizawa, who would go on to write several Godzilla films as well as contribute to Tsuburaya Productions' Ultraman series. The monster Mothra would go on to become a very popular character, appearing in the Godzilla series film Mothra vs. Godzilla in 1964 and countless other films in the series afterward. Mothra eventually received her own trilogy of films in the late 1990's. Mothra also received favorable reviews in the United States when it was released there, with critics praising its cinematography and special effects.

Mothra remains a popular and beloved film among fans of the kaiju genre, due to its unique story and the fact that it introduced the fan-favorite kaiju Mothra.

This is a list of references for Mothra (film). These citations are used to identify the reliable sources on which this article is based. These references appear inside articles in the form of superscript numbers, which look like this: [1]

3 months ago
Score 0
If the Rolisicans are a mix of Americans and Russians, how come they didn't nuke Mothra? Russia and America both like to blow up nuclear weapons.
Permalink
You are ignoring the author of this comment
Show comment | Manage ignore list

12 months ago
Score 0
Dunno if this was false info, but Wikipedia says that the Diet Building was supposed to appear in this film before changing it to Tokyo Tower. The article also mentions New Kirk City as being based in New York City and San Francisco.
Permalink
You are ignoring the author of this comment
Show comment | Manage ignore list

5 months ago
Score 0
Offically it's a Godzilla movie, but plotwise it's a basically a Mothra movie with Godzilla used a plot device
Permalink
You are ignoring the author of this comment
Show comment | Manage ignore list

25 months ago
Score 0
This was the first time since G54 were I liked the characters! I especially loved the “bulldog” guy. The fairies singing is beautiful. The cuteness of both Mothra’s larvae form and Imago form actually work here because she is a nice monster only causing destruction because she is searching around human civilization for her fairies. Speaking of Destruction, the scenes in Tokyo and New Kirk had some really great destruction scenes, A really good film, 5/5
Permalink
You are ignoring the author of this comment
Show comment | Manage ignore list

44 months ago
Score 0
Finally watched this film today. It's a great movie and one of the best from the Showa era. Almost everything about it is perfect and features some of the best human characters from any Showa film.
Permalink
↑ back to top ・ contents
Retrieved from "http://wikizilla.org/w/index.php?title=Mothra_(film)&oldid=173249"
Categories: