Godzilla Unleashed: Double Smash is a video game developed for the Nintendo DS by Pipeworks in 2007, alongside Godzilla: Unleashed.

Godzilla Unleashed: Double Smash is a two-dimensional sidescroller. The player controls two monsters, one on the top screen that flies, and another on the bottom screen that walks across the ground. The game is 2.5-D and moves slowly to the end of the level. Small challenges confront the player during gameplay, including human military, flying crystals and buildings. When the player comes across a crystal or building, they must execute a combo to destroy it. Monsters can use high and low attacks plus a beam weapon. If the blue bar on the screen is filled, the player can execute a surge attack that destroys all on-screen enemies. The bosses in the game are all unplayable with the exception of Destoroyah. Every stage in the game has two enemy monsters, a mini-boss which can be found at the middle part of the stage, and a final boss which can be found at the very end of the stage. Within the game's story mode, the game cannot be saved and the player must complete the story in a single playthrough. 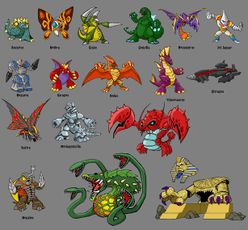 Artwork of the playable monsters and bosses in Godzilla Unleashed: Double Smash

Cairo is... Lost in Space

Atlantis Rises from the Deep

There are three different game modes, two of which can be unlocked by finishing the game for the first time.

↑ back to top ・ contents
Retrieved from "http://wikizilla.org/w/index.php?title=Godzilla_Unleashed:_Double_Smash&oldid=160263"
Categories: