Godzilla Against Mechagodzilla (ゴジラ×メカゴジラ,   Gojira tai Mekagojira, lit. Godzilla vs. Mechagodzilla) is a 2002 tokusatsu kaiju film produced by Toho, and the twenty-sixth installment in the Godzilla series, as well as the fourth in the Millennium series. The film was released to Japanese theaters on December 14, 2002.[1]

Yet another reboot to the Godzilla continuity, Godzilla Against Mechagodzilla reintroduces Godzilla's popular foe Mechagodzilla for the Millennium series. When a second Godzilla attacks Japan in 1999, the Japanese government dredges up the bones of the original Godzilla from 1954 and uses them to construct an anti-Godzilla weapon: codenamed Kiryu. Kiryu is completed by 2003, when Godzilla returns to menace Yokohama. Kiryu is sent to combat Godzilla, but the monster's roar awakens the first Godzilla's spirit within the machine, causing Kiryu to go berserk. Kiryu's lead scientist Tokumitsu Yuhara races to rectify this error in the machine before Godzilla makes landfall again. But even if Kiryu is fixed, the question remains if the government would willingly launch it again.

After a second Godzilla attacks Tateyama in the year 1999, the Japanese government decides to commission a robot constructed from the original Godzilla's bones, with help from the country's top scientists. Four years later, the cyborg, called Kiryu, is finished and inducted into the Japan Self-Defense Forces along with its human pilots, the Kiryu Squadron. At the same time, Godzilla shows up once again, even though the JSDF seemed to finally defeat him. In the midst of the first battle, the original Godzilla's soul inside Kiryu is awoken by Godzilla's roar, and brings with it the memories of his death years ago. This action makes Kiryu extremely angry and he proceeds to destroy the city around him. Horrified, the Kiryu Squadron can only watch in terror and alarm as the rampaging cyborg destroys more city property than Godzilla did.

Kiryu is brought back to headquarters for further work. Meanwhile, Kiryu's main pilot, Lieutenant Akane Yashiro, tries to settle matters involving second lieutenant Susumu Hayama, scientist Tokumitsu Yuhara and his distressed daughter, Sara, who thinks that using Kiryu to fight is wrong and that it should be friends with Godzilla. Kiryu was put out of commission, until Godzilla once again attacked. The prime minister of Japan realized how dire the situation was, and he sent Kiryu into battle. Missiles and lasers were fired.

The two creatures clashed, slowly knocking into each other. Missiles, masers, the wrist blade, and all of Kiryu's lesser weapons were used to contend with Godzilla at a close range. Kiryu sent Godzilla into a centrifugal throw as it began to charge its ultimate weapon: the Absolute Zero Cannon. Unfortunately, Kiryu was downed before it could be used. Its pilot, Akane Yashiro, managed to take manual control of the robot as the machine was recharged by an AC-3 White Heron. Kiryu was sent back into battle, disabling Godzilla's heat ray and unleashing its Absolute Zero Cannon. Godzilla managed to survive the brutal attack, although it dealt him a massive chest injury. Kiryu's power supply was exhausted, and the Absolute Zero Cannon was destroyed. Godzilla returned to the sea, as Japan could only watch on in a bittersweet stalemate. 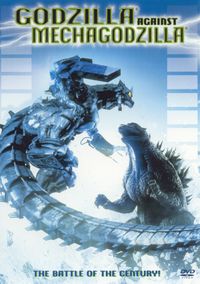 Godzilla Against Mechagodzilla was released on DVD in the United States by TriStar Pictures in 2004. TriStar used Toho's uncut international print of the film, including both Omni Productions' English dub and the original Japanese audio.

Godzilla Against Mechagodzilla is generally liked by Godzilla fans for introducing what some consider the best incarnation of Mechagodzilla.

Mike Pinsky of DVD Talk gave the film three stars out of five, saying: "While I did have some minor complaints, [this is] a fine entry in the series." Pinsky said "the plot is more interesting than most giant monster movies," and "the battle scenes, which are the main reason anyone watches these films to begin with, were great." Matt Paprocki of Blog Critics said the film is "pretty flawed, [but] those of us who still love seeing Japan get trampled are in for a treat." Stomp Tokyo praised the "great monster fight action" but criticized the "uncompelling non-monster scenes." Giving the film a "B+" score, Mark Zimmer of Digitally Obsessed said that it's "a good deal of fun and one of the better entries in the series." Digital Monster Island gave the film a "B" rating, calling it "a fun and exciting film that should please most kaiju fans."

This is a list of references for Godzilla Against Mechagodzilla. These citations are used to identify the reliable sources on which this article is based. These references appear inside articles in the form of superscript numbers, which look like this: [1]

25 days ago
Score 0
i didn't know there was a robot trilobite. does it still exist today unlike those old fossil trilobites.
Permalink
You are ignoring the author of this comment
Show comment | Manage ignore list

12 months ago
Score 0
I have yet to see any source to support that claim. Anguirus was considered for Godzilla Against Mechagodzilla but he's the only monster confirmed to be scrapped from that film.
Permalink
You are ignoring the author of this comment
Show comment | Manage ignore list

12 months ago
Score 0
Yeah, Anguirus was considered a couple times, but I remember somewhere, Titanosaurus being considered. May have been a fan theory, since you know, fan theories.
Permalink
You are ignoring the author of this comment
Show comment | Manage ignore list

26 months ago
Score 0
Gaira didn't receive his own copyright icon until the release of Godzilla: Rulers of Earth over a decade after this movie came out.
Permalink
You are ignoring the author of this comment
Show comment | Manage ignore list

My Thoughts: Godzilla Against Mechagodzilla

Though not quite on par with "Godzilla vs Mechagodzilla II" this is still an interesting retelling of the Godzilla/Mechagodzilla rivalry, and a decent entry in the series.

Mechagodzilla's new design is a great amalgam of previous incarnations, and the concept of incorporating the bones of the original Godzilla into its construction is a pretty cool idea. With the exception of a single rampage by MechaG, however, the movie doesn't really do anything with the whole genetic memory angle.

Godzilla's new look is pretty cool, too, and the human characters are decent enough for a Godzilla flick. I also LOVE the music in this movie. It has the grand epic feel that just gives me goosebumps.

Not the best in the Millennium series, but still a decent flick.
Permalink
You are ignoring the author of this comment
Show comment | Manage ignore list

36 months ago
Score 1
It's alright but I prefer Tokyo SOS. This one just feels like set-up with a somewhat anti-climactic ending.
Permalink
↑ back to top ・ contents
Retrieved from "http://wikizilla.org/w/index.php?title=Godzilla_Against_Mechagodzilla&oldid=163760"
Categories: