A Trilobite (三葉虫,   San'yōchū) is a class of extinct prehistoric marine arthropod that are closely related to chelicerates (The class of arthropods that include arachnids and horseshoe crabs)[1] that lived from the early Cambrian period until the end of the Permian. Trilobites are among the most famous fossilised invertebrates, and specimens have been found on every continent. A Trilobite famously appears in the 1954 Toho film, Godzilla, and another, cybernetic one, played a minor role in the 2002 Toho film, Godzilla Against Mechagodzilla.

The term 'Trilobite,' meaning "three lobes," refers to the organism's structure. Trilobites have an exoskeleton which is divided into three lobes. When alive, Trilobites bore a resemblance to the still-extant Horseshoe crab. 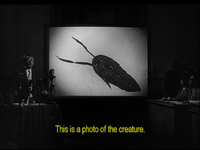 Dr. Yamane shows a photograph of a Trilobite in Godzilla (1954)

During the Odo Island expedition in 1954 headed by Kyohei Yamane, a perfectly intact Trilobite that had somehow survived to the present day was discovered embedded in a huge radioactive footprint. After further study, Yamane concluded that the Trilobite, and potentially numerous other prehistoric lifeforms such as Godzilla, escaped extinction by surviving in deep isolated underwater pockets for millions of years. This particular Trilobite had been living in the same underwater pocket as Godzilla when the Castle Bravo hydrogen bomb test conducted at Bikini Atoll completely destroyed its habitat and drew Godzilla to the surface, with the Trilobite stuck to the bottom of his foot. As Godzilla crossed Odo Island, the Trilobite was dislodged from his foot and came to be found in the footprint.

The cybernetic "Mecha-Trilobite" in Godzilla Against Mechagodzilla

By 1999, scientist Tokumitsu Yuhara had successfully created a cybernetic Trilobite, which was dubbed Mecha-Trilobite (メカトリロバイト,   Mekatorirobaito). Using living nerves and tissue from Horseshoe crabs along with robotic components and special "DNA computers," Yuhara perfectly replicated the extinct arthropod, which moved and behaved as if it were alive. Yuhara intended to use this method to preserve extinct and endangered species. When the Japanese government learned of Yuhara's work, it recruited him to use his method to cybernetically revive the original Godzilla as a battle machine dubbed Kiryu, so it could fight the current Godzilla. 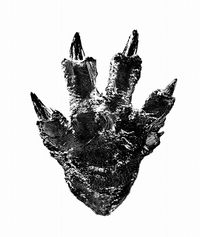 Concept art of the 2016 Godzilla's foot, featuring a Trilobite stuck to it

This is a list of references for Trilobite. These citations are used to identify the reliable sources on which this article is based. These references appear inside articles in the form of superscript numbers, which look like this: [1]

43 months ago
Score 0
Mecha-Trilobite? A minor kaiju so insignificant it doesn't even have its own page? Wow, to think that Maneater is more relevant than that thing...
Permalink
↑ back to top ・ contents
Retrieved from "http://wikizilla.org/w/index.php?title=Trilobite&oldid=174756"
Categories: