A species of fungus native to a remote island in the South Pacific, the Matango were mutated by the radiation from nuclear tests conducted in the area. Their growth accelerated, the Matango overran the entire island. The crew of a fishing boat which crashed on the island fell victim to the Matango after eating it, transformed into grotesque creatures covered in spores. When a yacht crashed on the island not long after, the passengers found the older shipwreck and discovered a log warning about the dangers of consuming the fungus. However, one-by-one the crash survivors gave in and ate the fungus, and were themselves transformed into Matango zombies. Only one survivor managed to escape back to Japan, but still ended up being infected by exposure to the Matango spores.

The name "Matango" comes from "Mamadango" (ママダンゴ), another name for the Astraeus hygrometricus fungus. Humans in the process of being assimilated by the Matango are called Matango Kaijin (マタンゴ怪人).[5]

When not colonizing a host, the Matango resemble large orange mushrooms, with unusually large spores emanating from them. After infecting a human host, the host will gradually grow mats of fungus over their skin, and gradually go insane. Once the Matango has matured, the human's upper body is replaced by a fungal cap, and their lower body becomes equally deformed, with giant legs and long claws attached to gigantic, muscular arms.

According to the records of a wrecked research ship discovered on the Matango's island, Matango are a previously-undiscovered species of fungus native only to that island. As the island is located in irradiated waters, it is suggested that the Matango's gigantic size and bizarre abilities are the result of native fungi mutating as a result of atomic radiation. 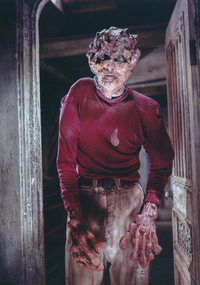 A Matango Kaijin in Matango

The Matango are an unusual and undiscovered species of mushroom which inhabit their own island in the South Pacific Ocean. After a ship, which had been damaged in a storm, landed on the island, its crew tried to search for food, and came across a natural marvel. Pools of water had been seemingly carved out of the ground, and were filled with rainwater, and an endless supply of the mysterious mushrooms. The crew went searching for other food, but found none except the mushrooms. Fearing the effects of eating something which they didn't know whether it was harmful or not, the crew resisted the urge to eat them. Strangely, they also discovered that another boat had previously arrived on the island, yet it was covered in mold which they tried to clean away using bleach. It was theorized that these mushrooms may have been assisted in growing so large by the presence of nearby nuclear testing.

Eventually, hunger set in, and one of the crew, desperate, ate some of the mushrooms. At first, they seemed to be perfectly fine, but over time, the mushrooms began to colonize their body in a way that was similar to the Cordyceps fungus. In addition, the infected crew member convinced more of his friends to eat the mushrooms, though this was probably a result of the Matango's own abilities. Eventually, all but one of the of the crew, Kenji, became infected by the Matango, and were reduced to the point of lumbering, insane, walking mushrooms.

Kenji escapes on the intact boat, and travels to Tokyo. At the end of the film it is revealed that he too is infected by the Matango, and is slowly beginning to transform, noting that the humans and the Matango are very much alike. 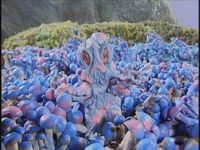 The Matango are able to transform other creatures into Matango when they are eaten by them.

When in the first stage of colonization, the Matango can use speech to convince non-infected hosts to consume the Matango and become infected.

The Matango have strong arms and claws which they can use to attack and restrain opponents.

It is possible that contact with a fully-assimilated Matango host can spread the fungus, demonstrated when Kenji becomes infected by the Matango despite never consuming it.

Matango mushrooms grow substantially from contact with water. Sustained rainfall can cause Matango to grow at accelerated rates.

Matango seem to possess a hive mind, and the various infected hosts are capable of forming coordinated attacks to capture and infect more hosts.

In Godzilla Island, the Matango generated by Neo Hedorah are incapable of mutating those they infect, but are capable of sapping their energy instead.

Fully and partially-assimilated Matango hosts appear to be somewhat vulnerable to gunfire, though they can withstand several shots without visible injury. Matango are also somewhat physically frail, as one's arm was severed instantly simply due to Murai striking it with his rifle. In Godzilla Island, the Matango can be killed by temperatures higher than 10,000 degrees Celsius.

In Godzilla: Monster of Monsters!, the Matango appear in their own hyperspace level sections in which the player, controlling Godzilla or Mothra, must destroy or evade a large Matango hive (coming in three different levels of difficulty) in order to clear the level. While trying to destroy the hive the player must also contend with projectile spores and even smaller individual floating Matango. Matango Hives can also appear shortly before the player fights one of the game's bosses, and attacking the Matango spawned from the hive rewards the player with health power-ups.

Initially, a Matango's host sounds and speaks like any human. After the Matango begins to fully colonize the person, their sounds are reduced to grunts and deep voiced laughter. The iconic deep laugh of the Matango would later be recycled for the iconic laugh of Alien Baltan from Ultraman. Their laughter was also slightly raised in pitch, then reused for the Ultraman Leo alien, Alien Flip. The Matango's laugh was also used as the groaning sound of a zombie in the Japanese trailer for Dawn of the Dead. The higher pitched giggling laughter of the Matango was used in the Ultra Series for the laughter of the child like specter Lilly from Ultra Q and as the laugh of Alien Perolynga.

This is a list of references for Matango. These citations are used to identify the reliable sources on which this article is based. These references appear inside articles in the form of superscript numbers, which look like this: [1]

Showing 12 comments. When commenting, please remain respectful of other users, stay on topic, and avoid role-playing and excessive punctuation. Comments which violate these guidelines may be removed by administrators.

↑ back to top ・ contents
Retrieved from "http://wikizilla.org/w/index.php?title=Matango&oldid=163819"
Categories: