A huge prehistoric reptile resembling a modern walrus, Maguma lived in Antarctica tens of thousands of years ago before he was disturbed and awakened in the modern day by the jet pipes used by the United Nations to change the Earth's orbit and avoid a collision with Gorath. Maguma lashed out and nearly sabotaged the operation, but the UN was able to exterminate him using the laser mounted on a VTOL aircraft. Despite only appearing in a single film in a very minor role, Maguma has made sporadic appearances in non-film media along with Toho's other kaiju, primarily in video games. Most recently, Maguma was featured in GODZILLA: Monster Apocalypse, the first official prequel novel for the GODZILLA anime trilogy.

Maguma's name is the Japanese approximation of the word "magma." The name is somewhat ironic given that Maguma emerged from an iceberg in Antarctica, though this may be in reference to the dormant volcanism of the continent. The name "Maguma" was chosen by a public poll.[7]

Maguma's appearance in Gorath was requested by Toho executives, who felt that the inclusion of a kaiju was necessary in an Eiji Tsuburaya tokusatsu film. Director Ishiro Honda was opposed to the idea, but eventually gave in and contributed to design proposals for the creature. Honda said in a later interview that Gorath would have been his favorite film he directed were it not for the inclusion of Maguma.[8] In Takeshi Kimura's script for Gorath, Maguma was simply described as a dinosaur, while the finished product still referred to Maguma as a reptile despite his strong resemblance to a walrus.[2] 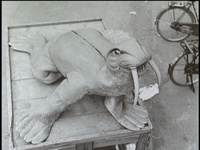 Maguma's head was modeled by Teizo Toshimitsu, while his body was modeled by the Yagi brothers, Kanju and Yasuei. They made the suit's structure from scratch, using wire netting, cloth, and sponge.[9] The body and limbs were adhered using a mix of latex and sawdust, with its flippers molded separately.[7] The suit was a brown color, with an apparatus installed in its eyes to allow them to glow blue. Fire-retardant material was applied to the suit in order to prevent it from catching fire from the flames given off by the jet pipes during filming.[2] Keizo Murase sculpted Maguma's tusks from polyester resin, his first-ever time using this material, as he found it was the best way to make them appear sharp. Eiji Tsuburaya was impressed, initially believing the tusks were made from ivory before Murase explained that he had used a new material, much to Tsuburaya's delight. A 2-shaku (Japanese foot) Guignol or hand-operated puppet of Maguma was employed for close-ups and fine movement. This Guignol was operated by modeling staff member Eizo Kaimai. 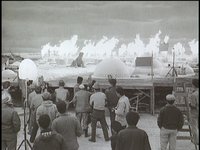 The Maguma suit on set for filming of the scene of the monster among the jet pipes. According to Teruyoshi Nakano, Haruo Nakajima would have been wearing the suit during this scene.

According to special effects assistant Koichi Kawakita and actor Takashi Shimura, Tsuburaya directed all of the scenes in which Maguma was involved rather than Honda. Assistant director of special effects Teruyoshi Nakano stated that Maguma was primarily portrayed by Katsumi Tezuka, while Haruo Nakajima wore the suit during the scene where Maguma is surrounded by the jet pipes.[10] However, Nakajima stated that he had no memory of playing Maguma.[11] Whoever was in the suit was exposed to the intense heat given off by the jet pipes. The staff tried painting his back with melted plaster, but it had no effect, and they resorted to using a different flame-retardant material.[9]

Maguma was removed from Brenco Pictures' American version of Gorath. The distributors found the character's appearance comical, mockingly dubbing him "Wally the Walrus." Test audiences agreed, even with the monster given Rodan's fiercer roar and shrouded in optically printed fog.[12] Only a shot of Maguma's corpse buried in rubble remains in the American release. 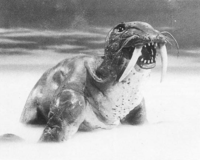 Maguma's suit in use as Todora for Ultra Q

Tsuburaya Productions later used the Maguma suit to depict the monster Todora in episode 27 of Ultra Q. Whiskers were added to the suit's face and the blue glow effect was removed from its eyes. The suit may have been planned to be re-purposed once again for Todogon, a walrus monster planned for the ultimately unproduced Ultraman script "The Negative 40 Degrees Battle."[13]

According to an interview with Ishiro Honda, an early draft for the 1968 film Destroy All Monsters called for "all monsters" to appear. Maguma was featured along with Ebirah in the film's "review script," which did not feature Anguirus, Minilla, or Gorosaurus.[14] Maguma and Baragon defended the Kilaak base in Izu from the JSDF instead of Godzilla and Anguirus. In addition, the final draft of the film's screenplay featured Maguma as the monster which attacks Paris and destroys the Arc de Triomphe, but he was replaced in the role prior to filming by Baragon, who himself ended up being replaced by Gorosaurus for the scene.[2]

Despite canonically being a giant prehistoric reptile, Maguma resembles a giant walrus[2] with elongated fore and hind limbs, green eyes, pale tusks, and smooth brown skin with no visible hair. Unlike real-life walruses, which possess vestigial tails, Maguma has no tail at all.

A view of Maguma's blood cells from under a microscope, used in determining its species as a reptile

Maguma is a walrus-like creature which inhabited Antarctica tens of thousands of years ago[2] and was reawakened due to changes in the climate caused by the ignition of the jet pipes. Despite its appearance, Maguma is actually a member of a species of reptiles,[5] determined by examining samples of its blood under a microscope.[2]

Maguma was disturbed from its hibernation by changes in the Antarctic climate caused by the ignition of the hydrogen jet fields on the continent used to propel the Earth out of the path of the rogue star Gorath. Irritated by the increased temperatures, Maguma attacked the power station of a jet field before returning to its home in a neighboring canyon. As the dysfunction of the fields and continued attacks would spell doom for the Earth, a VTOL aircraft was sent to dispose of Maguma. The VTOL strafed the walls of the canyon with its laser, causing Maguma to be buried in an avalanche. The creature broke free shortly afterward, only to be killed by direct hits from the aircraft's laser.

Due to possessing no extraordinary abilities, Maguma relies exclusively on its forelimbs to cause destruction. This is demonstrated when it uses one of its flippers to breach and destroy part of a jet pipe power station. Although not taken advantage of in its sole film appearance, Maguma also possesses sizable tusks which could be used to wreak further havoc.

Maguma can reach speeds of up to 200 kilometers per hour underwater.[6]

Maguma displays at least a moderate measure of durability, surviving a forcible avalanche and being buried under a number of boulders and other chunks of rock.

Although surviving the first attempt on its life by way of burying, Maguma was less fortunate against the lasers of the VTOL and was quickly dispatched.

Maguma appeared in the Monster Warrior Godzilla segment, where he was one of many kaiju who lived on their own planet.

Maguma and Varan in Monster Olympics

Maguma makes an appearance in the "Space Monsters vs. Earth Monsters" portion of the 1966 Asahi Sonorama Sonosheet Giant Monster Battle: 30 Monsters Rampage!!, as part of the Earth monster army fighting against King Ghidorah, Dogora, and Moguera.[15] The monster Todora is featured on the flip side of the Sonosheet in "Decisive Battle! Ultraman."

Maguma attacked and destroyed North Korea in 2024, then began moving south and approaching Seoul, South Korea. The United States launched a tactical nuclear missile at Maguma and destroyed it, marking the first use of a nuclear weapon against a kaiju.[16]

This is a list of references for Maguma. These citations are used to identify the reliable sources on which this article is based. These references appear inside articles in the form of superscript numbers, which look like this: [1]

Showing 26 comments. When commenting, please remain respectful of other users, stay on topic, and avoid role-playing and excessive punctuation. Comments which violate these guidelines may be removed by administrators.

↑ back to top ・ contents
Retrieved from "http://wikizilla.org/w/index.php?title=Maguma&oldid=174177"
Categories: