The result of the Space Amoeba possessing a mata mata turtle, Kamoebas was used as part of the sinister alien's plan to take over the Earth. A group of humans on Sergio Island learned that the amoeba's weakness was the sonar given off by bats, and so unleashed a large swarm of bats from a cave, severing its control over Kamoebas and Ganimes, a giant rubble crab that the amoeba had also possessed. Kamoebas and Ganimes fought to the death, eventually falling into the crater of an active volcano, destroying all remaining traces of the Space Amoeba. In Godzilla: Tokyo S.O.S., set over 30 years later, the carcass of another Kamoebas washed up on the shores of Japan with large gash wounds on its neck. The Anti-Megalosaurus Force determined that Kamoebas was killed by a larger predator: Godzilla. While Kamoebas did not debut in the Godzilla series and his only appearance in a Godzilla film came as a carcass, he has been featured in non-film media such as manga, comics, and even some video games. Kamoebas also made an appearance in the 1970's tokusatsu television show Go! Godman as one of Godman's enemies. Most recently, Kamoebas was featured in GODZILLA: Monster Apocalypse, the official prequel novel to GODZILLA: Planet of the Monsters.

Kamoebas' name is derived from the Japanese word "kame" (カメ), which means "turtle," and "amoeba" (アメーバ,   Amēba), a reference to Kamoebas' creator, the Space Amoeba. As seen in a set photo, the monster's original English name was Quameba.[2] In the English subtitles for Tokyo Shock's DVD release of Space Amoeba, he is referred to as Kamoeba.

Kamoebas' scientific name given in Godzilla: Tokyo S.O.S., Megalo matamata, is likely derived from the Greek word "Megalos," which means "giant" or "great," and "matamata," which comes from the mata mata turtle. The Kamoebas from Tokyo S.O.S. is sometimes designated in official books as Second Generation Kamoebas (二代目カメーバ,   Nidaime Kamēba).[7]

According to the audio commentary by producer Fumio Tanaka included on Toho and Tokyo Shock's DVD releases of Space Amoeba, Kamoebas' name was originally Zenikles during the planning stages of the film.[8]

The Kamoebas suit from Space Amoeba was modeled by Nobuyuki Yasumaru. The entire body of the suit was created from clay using a plaster mold, and the texture of its skin was molded in such a way to give the appearance of fine scales. The spikes on Kamoebas' shell were arranged in a clockwise pattern like the Anguirus suit from Destroy All Monsters, which was also modeled by Yasumaru. There was an opening on the abdomen of the suit, meaning suit actor Haruyoshi Nakamura entered it from the bottom. The suit's hind legs were designed so that Nakamura's knees aligned with the suit's knees, allowing him to perform more naturally in the suit.

The effect of Kamoebas' head extending quickly from his shell was achieved using compressed air cylinders inside the suit's neck. Nakamura was reportedly startled by the popping sound produced by the air cylinders every time the head was extended.[8][9] The unmutated mata mata turtle featured in the film was actually a live Japanese pond turtle with prosthetic thorns placed on its shell. Small Kamoebas props with springs in their hands and feet were also created, but went unused in the film.[10] The Kamoebas suit would be reused three years later for Kamoebas' appearance in an episode of Toho's tokusatsu television series Go! Godman.

Originally, Kamoebas' role in Godzilla: Tokyo S.O.S. as a corpse that washes ashore after being killed by Godzilla was filled by a Liopleurodon. Toho decided to replace the Liopleurodon with an existing kaiju rather than create an original creature just to have it appear as a corpse. Director Masaaki Tezuka proposed using Anguirus in the role, but producer Shogo Tomiyama denied the request, wanting to keep Anguirus alive for possible use in a sequel.[12] Tezuka proposed Gamera next, and Toho countered with the only turtle kaiju they held the rights to: Kamoebas.[13] Concept art for both the Liopleurodon and Kamoebas' corpses was created by Shinji Nishikawa.[11] No suit was constructed for Kamoebas' appearance in this film, and instead the creature's carcass was portrayed using a prop.[14]

Kamoebas is a rock-brown color all over its body, with a spiky, rocky shell, and no real tail. Kamoebas' face has the same rocky texture as its shell, orange eyes with big, black pupils, two fangs on the upper jaw which bend outwards, small teeth, and a long, extendable neck. It has a smooth, lighter underside that still maintains a rocky look, and small legs each with powerful claws on four sharp toes.

In Godzilla: Tokyo S.O.S., Kamoebas is now dark blue in color opposed to rock-brown, but still keeps the spiky, rocky shell, and its tail is enlarged. It no longer possesses fangs, but keeps the small teeth and the extendable neck. The bottom of its claws are a light brown color, which could mean the rest of its underside is that color as well. The left side of Kamoebas' neck has a bloody scar, which was made by Godzilla.

Kamoebas was a mata mata turtle living on Sergio Island that was possessed and mutated into a monster by the Space Amoeba in his attempt to conquer the Earth. Although Kamoebas was killed along with the Space Amoeba and Ganimes, at least one other Kamoebas existed on the island and was first sighted in 1987.

In Godzilla: Rulers of Earth, Kamoebas is an ancient creature that has existed since prehistoric times, and like most of the other kaiju in the comic is part of the natural balance of the Earth. He is classified as a "water kaiju" in a mural on Infant Island depicting all of Earth's natural kaiju.

After Ganimes was destroyed, the Space Amoeba turned to a mata mata turtle and transformed it into Kamoebas, while also creating another Ganimes. However, bats fled from a nearby cave and caused the Space Amoeba to lose control of the monsters. Kamoebas and Ganimes battled each other up the mountain in the center of the island and both fell into the volcano, destroying themselves and the Space Amoeba for good. 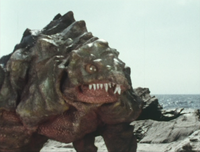 Kamoebas suddenly appeared at a beach and terrorized some beach-goers. The couple called out for Godman, who heard their plea and appeared on the scene in a matter of seconds. Kamoebas was confronted by the hero, and attempted to defend itself any way it could; mostly scratching and biting while rising on its hind legs. Despite making a valiant effort, Kamoebas was eventually outmatched. However, upon attempting to kill the monster with his God-Sparks, Godman realized that Kamoebas' carapace was too strong to kill it in this way. Another monster, Folgon, then suddenly appeared, and Godman left to fight it, ultimately allowing Kamoebas to escape with its life.

A dead Kamoebas, the first specimen of its kind seen since 1987, washed ashore in Japan in 2004, with gaping slash wounds in its neck. The J.X.S.D.F. surrounded the carcass and examined it, determining that it was probably attacked by a huge predator, most likely Godzilla, and eventually died from its wounds.

Kamoebas has a hard carapace on his back, which deflected Ganimes' claws and boulders the monster threw. In GODZILLA: Monster Apocalypse, Kamoebas' carapace rendered him immune to bunker-buster bombs, which were successful in killing Kamacuras.

Kamoebas used bites against both Ganimes and Godman. In the case of his fight against the latter, he was also able to rear up on his hind legs to swipe at and scratch Godman.

Kamoebas can extend his neck to bite at enemies. This ability was only seen in his debut film.

Kamoebas is vulnerable to ultrasonic frequency, as are all other creatures possessed by the Space Amoeba. This rendered the beast confused temporarily and ultimately caused the Amoeba to lose control over him. Though his extendable neck allows him greater reach, it presents a weak spot, as shown when Ganimes seized it with a claw. Kamoebas was ultimately destroyed by the intense heat of molten magma.

The first Kamoebas appeared in the Philippines in 2002, just two days after Dogora's defeat. The second Kamoebas, designated "Kamoebas II," appeared in Guam. The fourth Kamoebas, Kamoebas IV, washed ashore dead on Odo Island in 2030, and was the first evidence for the existence of Godzilla.[6] 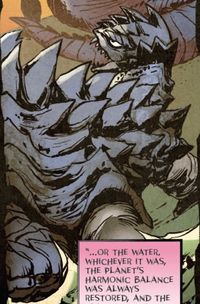 Kamoebas in Godzilla: Rulers of Earth

Kamoebas was first seen in a flashback where it came to shore while Gorosaurus and Megaguirus fought. It was classified as a "water kaiju" by the Shobijin. Kamoebas was captured by the Trilopods at some point and was imprisoned in their hive. King Caesar recognized Kamoebas as a monster from his time and freed him before freeing all of the other imprisoned kaiju. Kamoebas then assisted in the final battle against the Trilopods and Magita, and followed Godzilla out to sea along with the other monsters once the battle was over.

This is a list of references for Kamoebas. These citations are used to identify the reliable sources on which this article is based. These references appear inside articles in the form of superscript numbers, which look like this: [1]

30 months ago
Score 0
am I the only one who wants toho to make new figures of the space amoeba kaiju?
Permalink
You are ignoring the author of this comment
Show comment | Manage ignore list

43 months ago
Score 0
Kamoebas has to be one of my favourite minor monsters in the franchise. He's got a pretty cool design in general.
Permalink
You are ignoring the author of this comment
Show comment | Manage ignore list

45 months ago
Score 0
It's hilarious how Kamoebas got a new design for Millennium series yet only made an appearance as a dead corpse that washed up on a beach.
Permalink
You are ignoring the author of this comment
Show comment | Manage ignore list

49 months ago
Score 1
Poor Kamoebas. He doesn't get a lot of love.
Permalink
You are ignoring the author of this comment
Show comment | Manage ignore list

19 months ago
Score 0
i agree lante i do agree
Permalink
↑ back to top ・ contents
Retrieved from "http://wikizilla.org/w/index.php?title=Kamoebas&oldid=174727"
Categories: