Kappalge (カッパルゲ,   Kapparuge) is a bird kaiju created by Toho that first appeared in episode 20 of the 1972 tokusatsu kaiju series, Go! Godman titled "Godman vs. Bat Man and Kappalge."

In its debut appearance, Kappalge had a brown chest with green speckles, a large green bird head with a yellow beak, dark yellow hands, brown legs with orange stripes, brown feet and a black cape. When it appeared in Go! Greenman, Kappalge was given a full suit of white body armor, adorned with a brown belt, large artificial feathers, and a spiked tail. For Kappalge's brief cameo in the credits of the 2008 Godman special, it returned to its original Go! Godman appearance. However, it was not completely unchanged, as the chest piece was changed to a black coloration with green speckles, the cape was covered with white spheres, and a mane of blue feathers was added around the monster's neck. 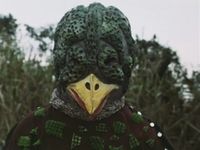 Kappalge is the twenty-fourth monster to battle Godman. It appeared as a stag beetle on a tree but mutated before a group of children into its monstrous form. The children called out for Godman, who arrived to battle him. Kappalge was eventually thrown to the ground and destroyed by Godman's God-Sparks, causing him to explode and revert into his beetle form, which split in half. 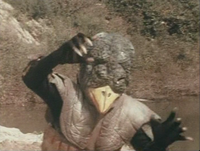 Like many other of the monsters to appear in Godman, Kappalage reappeared in the Greenman series. He appeared in episode 42 and was the forty-third kaiju to battle Greenman. In this series, Kappalge was created by Tonchiki, a subordinate of the demon king Maoh, for the sole purpose of retrieving the blood of children to free Maoh from his imprisonment in the Underworld. In the show, the monster was also changed to being an aquatic creature despite still being a bird in appearance. It is deployed in to a small lake where four small children had been net fishing. The water begins to erupt into foam when one of the boys dips his net in to it, and Kappalge bursts from the water. They are chased but manage to duck behind a bush and use a Green Call to summon Greenman. The hero quickly beats Kappalge in to submission who loses consciousness, but Tonchiki casts a spell on him to regain composure and use its trump card ability. The monster creates a bubble of foam and liquid which pops on contact with Greenman, blinding him. He repeats this ability once more, covering Greenman's eyes with a viscous liquid. Blinded, Greenman is easily beaten down but the children soon use two Green Calls to repair him and remove the obstruction. Greenman then ultimately sends one of the bubbles back at Kappalge's face using the Greenman Stick's Stick Beam ability, and destroys him using his Mouth Beam. 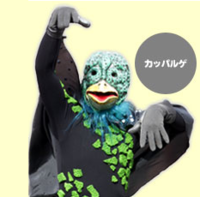 Kappalge in the Godman movie

Kappalge also made a brief appearance in the credits of the Godman movie. He is first seen facing off against Godman, but was quickly beaten down due to his cape being pulled over his eyes. Godman then beat the monster to the ground while he was blinded. Kappalge also re-appeared during a large battle against Godman along side Green Mask, Shilarji, Gaira, and Tsunozillas who he had allied with.

↑ back to top ・ contents
Retrieved from "http://wikizilla.org/w/index.php?title=Kappalge&oldid=160606"
Categories: