Shilarji was first created as an enemy of the monster Terra Incognita on the 1971 children's show, Chibikko Special. The suit was acquired by Toho following the show's conclusion and used as an enemy of Godman on Go! Godman. The head used in Godman does not appear to be original, as it has a striking similarity to the mask of Golden Bat featured in the 1972 Toho Pictures film, Here Comes Golden Bat. Shilarji reappeared in Go! Greenman, for which his body was reused with the head again replaced. Likely because of the original head being lost or becoming unsalvageable due to rot, it was substituted for that of one of the Skeleto-Men, repainted silver. Nearly 40 years later, Shilarji was featured in the anniversary short, Go! Godman, for which a new suit was sculpted by artist Fuyuki Shinada.

Shilarji has an ape-like body which is covered entirely in brown or beige fur except for on his upper chest and skeletal head. He has a large spike made of bone atop his head. There is also a row of bony spines going down the monster's short tail. 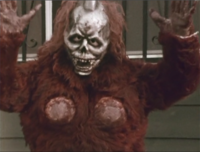 Shilarji was the thirtieth monster to battle Godman. After two kids were tormenting a small baboon in a cage, the cage strangely exploded. When the smoke cleared, there stood Shilarji. He scared the kids off, and they called for their hero: Godman. The two battled for a while and as always they both grew to giant size. After the giant battle, the two shrunk back down again for the final battle. Shilarji nearly won by beating Godman to the ground numerous times, but the hero came out victorious in the end. 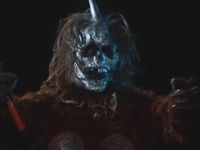 Shilarji was later re-created in episode 40 of Go! Greenman and was the forty-first monster to battle Greenman. While plotting to defeat Greenman, Tonchiki presented Maoh with his own monster creation. Right before his master's eyes, Tonchiki turned a subordinate of Maoh into Shilarji. Impressed in the creation, Maoh let Tonchiki unleash the monster. Like his first appearance, Shilarji made an explosive entrance from a bush, having been hiding inside a bowling ball that the kids were playing with. The kids called Greenman with the Calls and the two battled. Greenman struggled during the fight due to Shilarji's Morning Star flail, which the monster used to break one of his legs and inflict serious damage to his internal circuitry. Fortunately, with the assistance of his Greenman Stick, Greenman was able to recover from his injuries in time to defeat Shilarji.

Shilarji in the Godman movie

Shilarji's final appearance was in the 2008 Godman special. He was spawned from the flesh of Tsunozillas and was first seen in an alleyway where he began to chase Mika Ayase and Koichi Matsushita. Godman then appeared and seemingly defeated the monster before going to battle Gaira. But, unbeknownst to Godman, he survived and followed Godman all the way back to where Gaira was located. There, the two monsters nearly killed Godman by knocking off one of his bracelets and strangling him. Luckily, Mika threw Godman's bracelet back to him. Now fully powered again, Godman freed himself from Shilarji's grip. Mika also managed to find a Green Call in a box that had been knocked over and called for Greenman who fought Shilarji. In another effort to defeat Shilarji, Godman used his God-Circles, but the monster survived again. Godman was finally able to defeat Shilarji using his Super Sonic Wave attack.

This is a list of references for Shilarji. These citations are used to identify the reliable sources on which this article is based. These references appear inside articles in the form of superscript numbers, which look like this: [1]

↑ back to top ・ contents
Retrieved from "http://wikizilla.org/w/index.php?title=Shilarji&oldid=168124"
Categories: