The Skeleto-Men (スケルトマン,   Sukerutoman) are skeleton kaijin created by Toho that first appeared in episode 15 of the 1972 tokusatsu kaiju show, Go! Godman titled Godman vs. Skeleto-Man No. 1 and Skeleto-Man No. 2.

The Skeleto-Men are nearly identical with their only differences being a height difference and slightly differently colored skeletal heads, with Skeleto-Man No. 1's being white, and Skeleto-Man No. 2's slightly tinted yellow. They have black bodies with raised white patterns that correspond with where their bones would be, similar to Megahertz. Additionally, they wear grey gloves and boots. 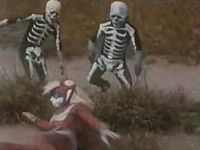 The Skeleto-Men were the seventeenth and eighteenth monsters to fight Godman. Godman was called to fight Skeleto-Man No. 1 after it had attacked a young boy who was fishing. Godman arrived on the scene to combat the monster and they fought atop a hill until the monster teleported away to further harass the child. Godman chased after him and threw an explosive discus called the God-Circle at Skeleto-Man No. 1, but instead of hitting the monster, it was caught. The Skeleto-Man threw the object to the ground, which exploded and somehow spawned a second Skeleto-Man. Together, the monster duo fought Godman relentlessly until they were destroyed with Godman's flail, God-Crush.

Both Skeleto-Men are shown to be capable of teleportation.

Skeleto-Man No. 1 is able to secrete and throw dart-like projectiles.

↑ back to top ・ contents
Retrieved from "http://wikizilla.org/w/index.php?title=Skeleto-Men&oldid=148328"
Categories: