Gowarackdon (ゴワラックドン,   Gowarakkudon) is a fire-breathing kaiju created by Toho that first appeared in episode 23 of the 1973 tokusatsu series, Go! Greenman titled Greenman vs. Gowarackdon.

Gowarackdon somewhat resembles a prosauropod in appearance. His skin is a light gold and covered in elaborate patterns of scales, and he has large, powerful hands. 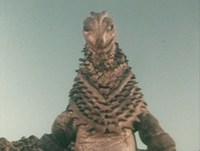 Gowarackdon was the twenty-third monster to battle Greenman.


↑ back to top ・ contents
Retrieved from "http://wikizilla.org/w/index.php?title=Gowarackdon&oldid=170811"
Categories: