Go! Greenman (行け！グリーンマン,   Ike! Gurīnman) is a Japanese tokusatsu show co-produced by Toho and Nippon TV that aired from November 12, 1973, to September 27, 1974. It is a followup series to Go! Godman, but the two series do not share canon with each other. A followup to this series was also later made called Go! Kotaro Ushiwaka.

Deep beneath a playground in Japan, Maoh, the source of all evil in the world, plots his escape from an underground cave after being banished there by God. To escape this underground imprisonment, Maoh must obtain the blood of human children. To do so, Maoh commands his loyal underling: Tonchiki and a race of servile clay dolls known as Minions of Maoh, to do his bidding. But, God sent out a robotic envoy: Greenman to protect the children and prevent Maoh from escaping. Maoh eventually granted Tonchiki the ability to mutate his subordinates into kaiju. After Greenman's first battle, he gave the children small devices called Green Calls which they can use to call him when in danger. From then on, it was up to Greenman to defeat the monsters and rid the Earth of evil. Eventually, after Greenman destroyed Pattern Kaijin and dealt Tonchiki a humiliating defeat, Maoh decided to deploy the final minion capable of transformation. Unfortunately for him, the children decided to launch a counterattack, and killed the subordinate before it had a chance to mutate. Because of this, Maoh took matters into his own hands and decided to teleport to the surface himself to obtain the blood; though because Maoh was banished, he was not able to move his legs. Despite this, Maoh turned some of the children into stones for Tonchiki to haul away to the underground cave. Greenman attempted to stop him, but was quickly overpowered by Maoh's dark magic. To save their hero, the remaining three children used the Green Calls to give power back to Greenman. Fully recharged, Greenman teleported to the cave and retrieved the stones. Using one of his tools, the Greenman Stick, he transformed the stones back to children and electrocuted Maoh, returning peace to the world. 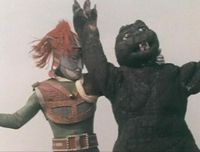 This is a list of references for Go! Greenman. These citations are used to identify the reliable sources on which this article is based. These references appear inside articles in the form of superscript numbers, which look like this: [1]

↑ back to top ・ contents
Retrieved from "http://wikizilla.org/w/index.php?title=Go!_Greenman&oldid=161828"
Categories: