The Cross-Dressing Kaijin is nothing but a Minion of Maoh which was granted a red and white garment similar to a sun dress and a veil of the same coloration. 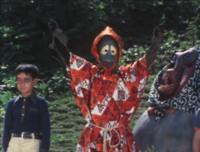 The Cross-Dressing Kaijin in Go! Greenman

The Cross-Dressing Kaijin was the forty-sixth monster to battle Greenman. It is originally an average Minion of Maoh created by Maoh, but was granted a sun dress and veil by Tonchiki, giving it further abilities. The monster was deployed to the playground just above the Underworld, where it began handing out balloons to the children there. However, Tonchiki, who had also teleported to the scene, casts a spell on two of the balloons which causes them to pop and release a mind-controlling mist. The two boys who had been holding the effected balloons, are brainwashed in to becoming the Cross-Dressing Kaijin's vicious subordinates. Together, they began chasing down the remaining children who were able to hide behind a tree and activate three Green Calls. The mechanical hero Greenman appears before the Kaijin in response to the signals but is immediately beaten down by him and his new minions. Once Greenman is incapacitated, the minions begin chasing the other children once more, which causes Greenman to jump to his feet and run after them. The Kaijin attempts to throw a bomb at Greenman to halt him, but it ends up exploding near Tonchiki, causing him to teleport to the Underworld and lose consciousness. After Maoh and another of his subordinates finally successfully awaken Tonchiki, he returns to the fight once more to see Cross-Dressing Kaijin continue to pull ahead in his battle with Greenman. Tonchiki calls him and his minions over to him, and the Kaijin summons two more balloon-like orbs and waves them over a bench to create 10 more of the explosives. The two brainwashed children begin lobbing the bombs at Greenman, who is able to evade all of them and destroy the orbs with his Ear Boomerangs. This breaks the Cross-Dressing Kaijin's control over the children leaving only him and Tonchiki to fight against Greenman. Tonchiki immediately runs from the battle but is scolded by Maoh as Greenman rips the power-giving sun dress from the Minion of Maoh's body. Tonchiki attempts to stop Greenman but the minion is ultimately reverted back to his powerless form. Admitting defeat, Tonchiki and the minion attempt to escape up a hill and the former Cross-Dressing Kaijin throws the last of his bombs down the hill in an attempt to stop Greenman. Albeit, the hero is able to once again evade the bombs and uses his Breaster attack. Tonchiki is able to teleport away to avoid destruction but the minion is not so lucky, being blasted to death by Greenman's Breaster missiles.

The Cross-Dressing Kaijin is able to take control of children's minds, and make them obey its every command. This is initially achieved with a mind-controlling gas, but the control can only exist as long as two pink orbs which the monster possesses stay unharmed. When controlled by the Cross-Dressing Kaijin, the effected victim gains red and blue marks around their eyes.

The Cross-Dressing Kaijin's aforementioned pink orbs can also create 10 handheld explosives at a time which explode on contact with their target. The monster can also materialize these explosives in his hands, but this only creates one at a time.