Alien Tiborus has a green plant body with a reddish-pink colored chest, neck and head. He has a round nose/mouth and two curved stem-like things coming from the top of his head. The stems have black fur or hair hanging from them. This black hair is also seen on the monster's face.

In Go! Greenman, Alien Tiborus' strength could be increased by music. Because of this, he wore a small device on his head which would play music broadcasted by Tonchiki from the Underworld. 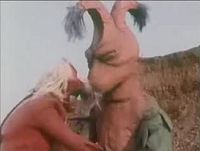 Alien Tiborus was the twenty-seventh monster to fight Godman. 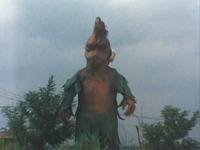 Alien Tiborus also appeared in episode 36 of Go! Greenman. He was the thirty-seventh monster to fight Greenman. In the show, Tiborus was blind and his strength could be enhanced by music. After a very long battle against Greenman, in which the hero was also hindered by Tonchiki multiple times, Greenman was eventually victorious.

In Go! Greenman, Alien Tiborus shared his roar with Varan and the Showa Baragon. However, his roar is slightly elevated in pitch.

6 months ago
Score 0
This is the weirdest design Ive seen so far.
Permalink
↑ back to top ・ contents
Retrieved from "http://wikizilla.org/w/index.php?title=Alien_Tiborus&oldid=147111"
Categories: