Trilorn (トリローン,   Torirōn) is a kaiju created by Toho that first appeared in episode 25 of the 1972 tokusatsu kaiju show, Go! Godman titled "Godman vs. Trilorn and Ibogiller."

Trilorn has a large, pink, bulbous head decorated with blue eyes on either side of it and two bulbous tentacle-like protrusions on the center of its face, just above its mouth. The monster's neck is adorned with a ring of red-pink spines similar to a mane. The spines wrap around Trilorn's body and connect with a carapace on its back which possesses four more rows of spines extending along its back. The rest of its body is hued a light blue color and is peppered with circular growths on its skin. Trilorn has two arms and two legs with 4 fingers and 3 toes on each respectively, as well as a tail. 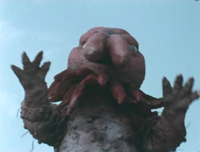 Trilorn appears peering over a hill in an amusement park where Monster Uncle and a group of children were playing with a ball. When the ball rolls onto a bridge, a woman named Eri goes to retrieve it, however on her way back to return it to the children they realize that the monster Trilorn is present whom begins rampaging. Monster Uncle hatches an idea to strap fireworks to the ball and launch it using a thick strip of elastic tied to either end of the bridge. He does so and launches the ball at Trilorn causing an explosion. The monster becomes agitated and begins spitting a pink gas from its mouth which begins to pollute the are where Monster Uncle and the children are standing, causing them to begin choking. Luckily, a hero emerges from the sky, Godman. He flies past Trilorn and fires a God-Spark at it before landing close by. He then enlarges himself to match the monster's height and they engage in a battle. After a drawn-out exchange of punches and kicks Godman is eventually able to knock Trilorn down and use his God-Sparks to destroy the monster. Trilorn was the thirty-fifth monster to battle Godman.

This is a list of references for Trilorn. These citations are used to identify the reliable sources on which this article is based. These references appear inside articles in the form of superscript numbers, which look like this: [1]


↑ back to top ・ contents
Retrieved from "http://wikizilla.org/w/index.php?title=Trilorn&oldid=160388"
Categories: