Hotter (ホッター,   Hottā) is a bat kaiju created by Toho that first appeared in episode 18 of the 1972 tokusatsu kaiju series, Go! Godman titled Godman vs. Trunker and Hotter.

In his debut appearance, Hotter was a humanoid monster which drew characteristics from rats. He has brown, fur like skin and long fangs with large ears. He also wore a bright green jumpsuit and a gold collar around his neck. In Go! Greenman, Hotter's appearance was altered to more so resemble a bat. His head was left unchanged and its collar was removed. The monster's jumpsuit was also removed and its entire body was replaced, now sporting orange skin with a white rib cage-like patterning on its chest which is covered up on its left side by a patch of dark fur. He was also given a long membrane in between his arms and lower body, making him resemble a bat or flying squirrel. However, these membranes do not enable flight and are purely aesthetic, despite the monster often being seen flapping his arms in place. 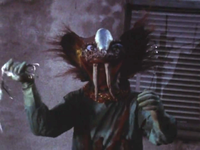 Hotter was the twenty-second monster to battle Godman. 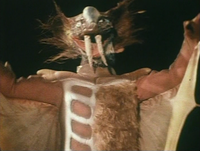 Hotter also appeared in episode 44 of Go! Greenman. He was the forty-fifth monster to battle Greenman. He was created by Tonchiki, a subordinate of the devil king Maoh, for the sole purpose of retrieving the blood of children to free Maoh from his imprisonment in the Underworld. Hotter was deployed through the Underworld's disguised entrance in a playground, where a large group of children had been playing with a jump rope. The plaything was suddenly ripped from the hands of the young girl who had been operating it, leading the whole group to investigate. They looked in to the tunnel where the jump rope had disappeared to, only for Hotter to jump out and chase them down. He singled out a boy and a girl from the group, grabbing on to their arms. However, the other children realized and used the devices known as Green Calls to summon Greenman to the scene. Responding to the signals of the devices, Greenman appeared before Hotter and began to battle him. After a short exchange of punches, Hotter began to demonstrate his trump card ability, of teleportation. Greenman was easily overwhelmed as Hotter began to rapidly disappear and reappear around the playground. Greenman attempted to run to the monster's new location but was beaten in to submission each time. Hotter often teleported behind Greenman to get free hits throughout the tedious battle. Eventually, Hotter was able to kick Greenman in the head, causing him to sustain heavy damage. The children once again used the Green Calls to repair Greenman's machinery. Greenman was then able to return to his feet and summon the Greenman Stick to beat Hotter into unconsciousness. Tonchiki quickly cast a spell on his monster to revive it and make it grow to giant size. Greenman also grew, using his machinery, and they resumed battle on a rocky terrain. After another short fight, Greenman was able to pull ahead in the overall battle, causing Maoh to become furious and cast a spell of his own. Maoh granted Hotter with a steel sword in an attempt to help Tonchiki's monster along. Greenman summoned the Greenman Stick a second time in response to the monster's new weapon, and their final battle raged on. Hotter's sword was quickly knocked from his hands by Greenman, and attempted to escape up a mountain. However, Greenman easily destroyed the monster using his Flash Shock ability which caused Hotter to spontaneously explode.

Hotter's primary ability in Go! Greenman was teleportation. It was first demonstrated in the Underworld when Tonchiki was attempting to sell Maoh on the monster. It proved to be a highly effective ability in combat with Greenman, as the hero was easily overwhelmed by Hotter's constant teleportations around the playground.

After growing to giant size and failing to succeed in his final battle with Greenman, Maoh granted Hotter with a short sword. However, the weapon was only utilized for a short time before Greenman was able to knock it from Hotter's hands.

24 months ago
Score 0
no
Permalink
↑ back to top ・ contents
Retrieved from "http://wikizilla.org/w/index.php?title=Hotter&oldid=127390"
Categories: