Gabara (ガバラ,   Gabara) is a mutant amphibian kaiju who first appeared in the 1969 Toho Godzilla film, All Monsters Attack.

In the context of All Monsters Attack, Gabara gets its name from Ichiro Miki's real-life bully Sanko, who he gives the nickname "Gabara."

Originally, Gabara was to be called Gebara (ゲバラ,   Gebara),[8] but Toho decided to change his name to Gabara in order to avoid confusion with the American biopic film Che!, which was released in Japan as Guevara! (ゲバラ!,   Gebara!) earlier in 1969.[5] The monster's original name "Gebara" can be seen on some early concept art. 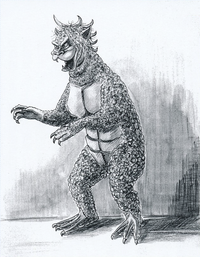 In the very earliest stages of conceiving a villain monster for All Monsters Attack, Toho considered a monster based on the mole cricket, a motif which was also considered for what ultimately became the Meganulon from Rodan. The giant mole cricket concept was given the name "Gebara," but was discarded as the filmmakers decided to go in a different direction and make the new kaiju a mutated toad instead. However, the mole cricket concept for Gebara was revived for the story Godzilla vs. the Space Monsters: Earth Defense Directive as a motif for the new kaiju Megalon.[9] While this project became Godzilla vs. Gigan, Toho went on to feature the insectoid kaiju Megalon in the following film, though his final design was based more on rhinoceros beetles and cicadas than mole crickets. The initial design for the toad-inspired Gabara was handled by Teizo Toshimitsu,[8] who drew the concept at actual size in order to aid in the eventual modeling of the suit. The concept was later re-drawn by art assistant Hiroshi Komura, refining the facial expression and touches to the chest and abdomen.[10]

For Gabara's suit, the head was modeled by Teizo Toshimitsu,[8] purportedly modified from that of a prior Godzilla suit.[11] All Monsters Attack would be the last Godzilla project Toshimitsu would work on.[10] Because Toshimitsu worked on the suits of both Gabara and King Ghidorah, there are similarities between the horns modeled on the top of their heads.[8] Gabara's body was handled by the Yagi brothers Kanju and Yasuei, and its form is said to take the overall shape of a tailless Godzilla.[8] Keizo Murase also acted as an assistant modeler for Gabara.[10]

The Gabara suit was reused for the monster's appearances in the tokusatsu series Go! Godman and Go! Greenman. While the suit had begun to deteriorate in Godman, it underwent minor repairs and aesthetic touch-ups for its role in Greenman.

The audio commentary for Classic Media's 2008 DVD release of All Monsters Attack humorously compares Gabara to a bipedal cat with car engine problems. Although he is said to be based on a toad,[5] Gabara is very similar to - and more than likely partially based on - the Oni of Japanese mythology and folklore. His costume design is very reminiscent of these demonic ogre or troll-like beings, further mixing the turquoise scales of a reptile with orange, cat-like fur and distinctly-mammalian facial features. He also has three horns on his head, again much like the Oni, whose horns varied between one-to-three on average. Gabara's ability to electrocute things on contact is possibly a reference to Oni lore, as they too were sometimes associated with the natural forces of lighting and thunder.

In All Monsters Attack, Gabara exists only within the dreams of protagonist Ichiro Miki. In the context of Ichiro's dreams, Gabara is a toad that was mutated by nuclear explosions into a giant bipedal ogre-like monster.[5] 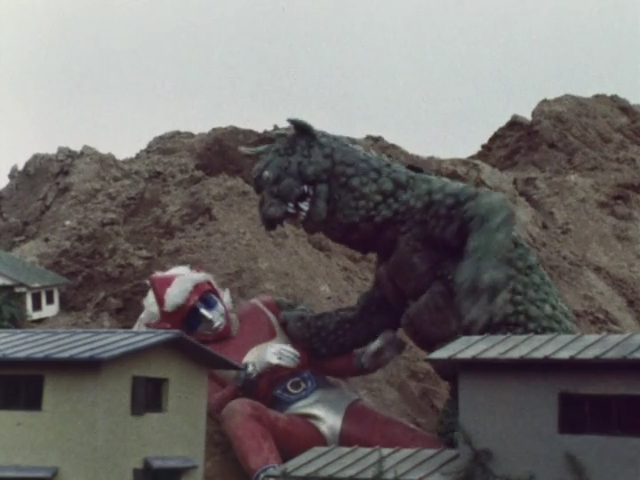 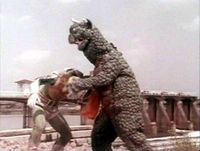 Gabara can channel energy through his body in the form of electricity. He can then channel it into his arms, and electrify anything he touches.

Gabara, after having shocked Minilla, strikes him with a Hammer Punch

Gabara can perform a powerful punch with his right arm, called the Hammer Punch (ハンマー・パンチ).[5] This was used in tandem with his electric abilities against Minilla.

Though this ability is never demonstrated onscreen, Gabara is said to be able to emit a green venom from his body.[5] The Kaiju Guide in the PlayStation 3 and 4 Godzilla game states that this venom comes specifically from Gabara's warts.[11]

In Go! Godman, Gabara could spew a noxious, blue smoke from his mouth.

Gabara throws one of his claws at Greenman, injecting him with venom

In Go! Greenman, Gabara can detach and throw his own claws, which are tipped with venom and can cause powerful explosions.

Gabara engulfs a child into his stomach

In Go! Greenman, Gabara can trap children by engulfing them into his body. This was shown when he engulfed an innocent boy before being repelled by Greenman.

Gabara was a 10 meter-tall monster that lived in the Amazon rainforest and frequently slaughtered local wildlife such as crocodiles. It was reported to have been injured in a thermite explosion and then fell into a river, where it was eaten by crocodiles and piranhas.[7]

Showing 39 comments. When commenting, please remain respectful of other users, stay on topic, and avoid role-playing and excessive punctuation. Comments which violate these guidelines may be removed by administrators.

↑ back to top ・ contents
Retrieved from "http://wikizilla.org/w/index.php?title=Gabara&oldid=169760"
Categories: