Yasugon (ヤスゴン,   Yasugon) is a kaiju created by Toho that first appeared in episode 4 of the 1972 tokusatsu kaiju series, Go! Godman titled Godman vs. Yasugon and Tsunokeler.

Yasugon's head oddly resembles a beaver. He has dark gray skin with yellow hued spines which run from the top of his head, down his back, and to the tip of his tail. In Go! Greenman, Yasugon's skin color was changed to a dark blue with the exception of the upper half of his head which was made a dull red/pink color. The shape of his head was also slightly altered.

Godman vs. Yasugon and Tsunokeler 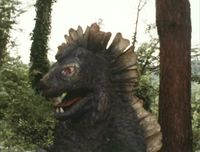 Yasugon was the fourth monster to fight Godman. 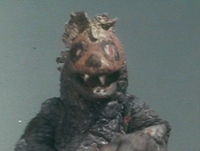 Yasugon also appeared in episode 37 of Go! Greenman, he was the thirty-eighth monster to battle Greenman. In the series, Yasugon was created by Tonchiki, a subordinate of the demon king Maoh, to harvest the blood of children to allow for Maoh to escape his imprisonment in the Underworld. He was deployed with Tonchiki to a playground built just above the Underworld. Yasugon possesses the ability to spit thick nets, and uses it to trap a child from the playground. Two other children notice this and use devices known as Green Calls to summon the robotic savior Greenman. Greenman wastes no time in responding to the calls, immediately appearing before the monster and engaging in battle. They fight a long battle until Tonchiki is ordered to use their trump card. He casts a spell on Yasugon which makes it rapidly mutate to giant size. However, Greenman utilizes his machinery to match the monster's height. Yasugon is able to overpower Greenman by tying his arms with a thick rope. Without use of his arms, Greenman is easily beaten on until he lay motionless on the ground. Luckily, three of the children from the playground use their Green Calls once more, reviving Greenman and giving him a boost of strength. The hero was able to return to his feet and snap the rope before using the Flash Shock technique to electrocute Yasugon.

Yasugon is capable of creating thick nets from his mouth and spitting them out at enemies on command. This was shown being used multiple times on Greenman.

Yasugon is able to summon ropes to his hands to quickly tie up foes. This was only used once when he materialized a rope and used it to tie up Greenman's arms.


↑ back to top ・ contents
Retrieved from "http://wikizilla.org/w/index.php?title=Yasugon&oldid=147999"
Categories: