Visually, Sibilegon resembles a humanoid feline with robotic parts attached to its body. It has a large central console where its chest would be, and its head is almost spherical with binocular-like eyes and a wrinkled, deformed face. It has armor over its legs, and a very long tail (which was later removed in Go! Greenman).

Sibilegon was sent out by King Flasher and was later defeated. 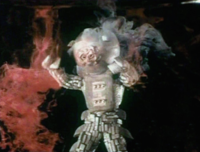 Sibilegon was mutated from a Minion of Maoh by Tonchiki to impress his master. It was immediately shown to be capable of flickering between visibility and invisibility to the questioning of Maoh who was reassured by his subordinate and allowed for the monster to be deployed. Sibilegon appeared from a portal nearby where he chased three children down in an attempt to acquire their blood for Maoh. However, the children were able to duck in to cover and use a Green Call to summon their hero Greenman. Greenman quickly appeared before the monster and they engaged in a short battle which revealed Sibilegon's invisibility capabilities to Greenman. The hero was easily beaten down by the unseeable foe until he called out for the Greenman Stick which when swung, connected with Sibilegon and caused him to become visible once more. After another short exchange of blows Sibilegon began taunting Greenman by jumping in and out of his portal. Greenman became agitated and chased Sibilegon through the portal which caused him to fall in the monster's toxic dimension. Sibilegon effortlessly beat down the weakened Greenman, and whilst the hero was occupied Tonchiki teleported to the overworld to pursue the children. However, the children used their Green Call once more which repaired Greenman's machinery and caused Sibilegon to flee his realm. With Greenman close behind, they were transported back to Earth where they engaged in a final battle. Sibilegon was no match for the revitalized Greenman and tried to flee yet another time through the portal. This time, Greenman fired a Leg Arrow at the monster which became lodged in the ground beneath the portal, and therefore shutting it off. Now attempting to run on foot, Sibilegon was quickly destroyed by Greenman's Flash Shock ability.

↑ back to top ・ contents
Retrieved from "http://wikizilla.org/w/index.php?title=Sibilegon&oldid=126924"
Categories: