Tsunozillas (ツノジラス,   Tsunojirasu) is a reptile kaiju created by Toho that first appeared in episode 22 of the 1972 tokusatsu kaiju series, Go! Godman titled Godman vs. Tsunojiras and Elephander.

Tsunozillas bares a close resemblance to the popular Ultraman series kaiju, Gomora. Tsunozillas has brown, rough skin with beige-colored horns, and dull orange eyes. In the 2008 Go! Godman film, Tsunozillas' eyes were colored in a brighter shade of orange, and his horns were made a metallic gold. 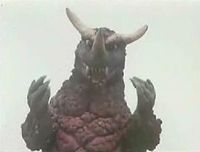 Tsunozillas was the twenty-ninth monster to fight Godman. Tsunozillas emerges from a mountain and scares the children that were there. Hearing the cries for help from the children, Godman flies in and engages in combat with Tsunozillas. Tsunozillas nearly overpowers the hero, but Godman eventually defeats him, then returns home to rest before seeking out Elephander. 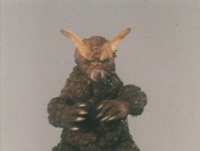 Tsunozillas also appears in Go! Greenman, created by Tonchiki to acquire the blood of children for Maoh. This Tsunozillas fought Greenman, but was also defeated.

Tsunozillas in the Go! Godman film

In this special film created to celebrate the anniversary of Go! Godman and its followup series, Go! Greenman, Tsunozillas is first seen attacking a city, with the threatened area now being Tokyo. Godman is then called to protect those threatened by the monster's attack, but, Godman gets heavily beaten down by the monster. Luckily, the hero defeats Tsunozillas using his God-Crush and God-Spark after a long and drawn out fight and much encouragement from Koichi Matsushita. Little did the hero know, Tsunozillas's body was split into multiple parts and created two more monsters.

Tsunozillas later reappeared in the Battle Royale at the end of the film, assisting Gaira, Shilarji, Green Mask and Kappalge, but was defeated again.

In Go! Godman, Tsunozillas' roars are borrowed from the Ultra Kaiju Zambolar, whose roars are in turn made from combined Godzilla and Gamera roars.

In the Godman film, Tsunozillas shared his roar with Varan and the Showa Baragon. In Go! Greenman, Tsunozillas reuses Arstron roars. Concidentally, Arstron is another monster who bears a vague similarity to both Godzilla and Tsunozillas.

17 months ago
Score 0
This guy is awesome!!!
Permalink
↑ back to top ・ contents
Retrieved from "http://wikizilla.org/w/index.php?title=Tsunozillas&oldid=160362"
Categories: