Totsaurus (トットザウルス,   Tottozaurusu) is a bird kaiju created by Toho that first appeared in episode 23 of the 1972 tokusatsu kaiju series, Go! Godman titled Godman vs. Totsaurus and Shilarji.

Totsaurus has beige skin covered in bright yellow fur except for the fur atop his head, which is a maroon color. He has very human-like eyes and a strange bird-like beak.

Totsaurus was the thirty-first monster to battle Godman. 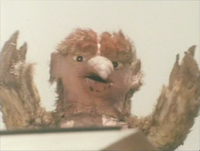 Totsaurus also appeared on episode 11 of Go! Greenman. He was the eleventh monster to battle Greenman.

Totsaurus reuses the roar of the Ultra series kaiju, Mukadender.

↑ back to top ・ contents
Retrieved from "http://wikizilla.org/w/index.php?title=Totsaurus&oldid=148214"
Categories: