Stock (ストック,   Sutokku) is a kaiju created by Toho that first appeared in episode 10 of the 1972 tokusatsu kaiju series, Assault! Human!! titled Last Moment of the Hero Human!!.

Stock somewhat resembles a European Dragon. He has flaps of skin between his arms which act as wings, and his body is thin and streamlined. Stock also has three dark spots on his neck.

Last Moment of the Hero Human!!

Stock was created and sent by King Flasher, but was defeated by Junichiro and Junjiro Iwaki. 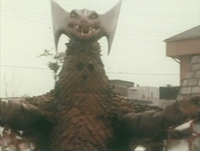 Stock also appeared in episode 7 of Go! Greenman. He was the seventh monster to battle Greenman. Him and Tonchiki went to a playground to terrorize the kids who were there. The kids called for their hero Greenman, using the Green Calls. The two battled in the playground, but Greenman came out victorious by utilizing his surroundings; such as propelling himself at Stock with a swing.

Stock's roar is a slightly modified roar of the Ultra kaiju Zambolar.


↑ back to top ・ contents
Retrieved from "http://wikizilla.org/w/index.php?title=Stock&oldid=148299"
Categories: