When in his Human No. 1 form, he has an Ultraman-like head which is covered by a large spiked helmet. Almost all of his body is white besides small red and blue stripes on his legs. Junichiro also wears silver bracelets on both his arms, armor on his chest, a belt, and silver anklets. 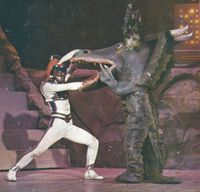 Junichiro Iwaki was originally an alien from the "Human Planet" who traveled to Earth and became a famous gymnastics coach. However, Junichiro resigned from his position to train children in martial arts after sensing that a being known as King Flasher and his army would attempt to invade Earth. Junichiro's predictions turned out to be true, and the children in turn were able to transform Junichiro into Human No. 1 by using a device known as a "Human-Sign", to help fend off the invaders. With the help of his brother Junjiro, and his friends Rumiko Hoshiyama and Yasubee Hirai, Junichiro managed to destroy King Flasher. This did not stop the Flashers however, as a new leader was appointed named Grand Flasher, who immediately battled and killed Junichiro. Junjiro then stepped forward to battle Grand Flasher, and was transformed into Human No. 2 by the Human-Signs. During their battle, Junichiro was miraculously transported to the Miracle Zone dimension, which revived him and fully healed his wounds. Returning to the front lines, the Humans were able to drive Grand Flasher away. From that point on, Junichiro and Junjiro fought off the hordes of kaiju deployed by the Flasher Corps, until they were able to confront Grand Flasher and destroy the invaders once and for all.

Junichiro Iwaki transforming into Human No. 1

Junichiro is capable of transforming into the powerful Human No. 1. To do so, he counts down from five, crosses his arms, and then performs a somersault. While in the air, he changes into his Human form.

Human No. 1 can hear any sound from an infinite distance away.[1]

Human No. 1 possesses eye sight ten thousand times better than that of an ordinary human.[1]

Human No. 1 can conjure and disperse electricity.

Human No. 1 can perform a move known as "Human Air Cut", where he jumps in the air and slashes his opponent like a sword.

Human No. 1 can use an ability known as "Human Stopper" by extending his arms forward in front of him. This will stop any oncoming projectiles.[1]

Human No. 1 can use an ability called "Human Finger Cross" by crossing his index fingers. By doing this, Junichiro is able to move his enemies and presumably objects with his mind.[1]

Human No. 1 can create powerful vibrations from his hands. These vibrations are capable of disjointing opponents.[1]

Human No. 1 can project a barrier around himself, temporarily blocking enemy fire.[1]

Human No. 1 can use a technique known as "Human Punch" to strike down his enemies with an extremely powerful blow from his fist.[1]

Human No. 1 can fire a deadly photon ray from his chest.[1]

This is a list of references for Human No. 1. These citations are used to identify the reliable sources on which this article is based. These references appear inside articles in the form of superscript numbers, which look like this: [1]