Although originating in an American comic and therefore not possessing a Japanese name, it is possible that Gekido-jin's name is derived from the Japanese words gekido (激怒), meaning rage, and jin (神), meaning god or deity.

As Godzilla approached the island of Kiryoku-shima, G-Force made its way to the island to attempt to warn and evacuate its population. However, the islanders had no interest in leaving their home, despite the oncoming danger. Ookii'mune, the priestess of the island's ancient god, insisted that they could defend themselves, and led the islanders and G-Force to a large statue of what appeared to be a demonic samurai warrior. Ookii'mune declared that this was no statue, but the petrified body of a mighty oni (demon), and proceeded to tell the legend behind it. 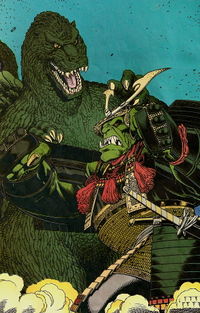 "Our ancestors first encountered Gekido-jin nearly 800 years ago when they first came to settle on Kiryoku-shima. The demon was constantly terrorizing their settlements-- killing even the mightiest of the warriors with ease. Legends say that several times our ancestors managed to destroy the oni -- but each time Gekido-jin was able to reform a larger and stronger body from the soil of the island itself! Finally... A mysterious monk arrived on our shores. He was a slight, quiet man possessed of great wisdom and strength of will. The monk, whose name has been lost to history, offered himself to the demon. You see, the monk knew something that Gekido-jin did not -- By willingly giving up his life, the monk's spirit was able to combat the demon directly and battle him to a standstill. Down through the centuries, their two spirits have continued the battle for dominance. It is said that the monk will never find peace until another sacrifices themselves to take his place."

Ookii'mune intended to sacrifice herself and awaken Gekido-jin, despite her friend Kogenta's and G-Force's protests. When Ookii'mune got injured before she could awaken Gekido-jin and Godzilla closing in on them, Kogenta desperately began to shout at the statue, trying to reach the monk's spirit within. Moments later, both the statue and Kogenta were crushed underfoot by Godzilla, who proceeded to incinerate the surrounding area with his atomic ray.

But Kogenta's attempts were not in vain. Moments later, the ground split open, and Gekido-jin arose. Unfortunately, he was only as high as Godzilla's knee, and when he smashed his war hammer into Godzilla's ankle, the Monster King vaporized Gekido-jin with his atomic ray. But Gekido-jin was not done, and began reforming his body from the stone and soil of the island, even larger than before. But his size was still not comparable to Godzilla's, who proceeded to continuously destroy Gekido-jin with his strength and atomic ray. Realizing Gekido-jin needed time to fully reform himself, G-Force distracted Godzilla by hooking his foot up to a lightning rod and giving him a hot foot.

By now, Gekido-jin was fully formed and nearly as tall as Godzilla. The two titans stared each other down before Gekido-jin swung his war hammer and smashed it into the side of Godzilla's head, toppling the beast. When he attempted to attack with his hammer again, Godzilla easily destroyed it with an atomic blast. The creatures attacked each other with all their fury, their struggle leading them to a seaside cliff. The two toppled over the side and crashed into the ocean below. Moments later, the two emerged from the waves, again staring at each other. This time, Godzilla broke the silence by destroying Gekido-jin with no effort at all with another atomic blast. Godzilla waited for his foe to return, but he never did. Godzilla then let loose a roar of triumph to the heavens, asserting the defeat of his ancient opponent.

With Godzilla off the island and back in the open sea, Gekido-jin's spirit was called back into hibernation by Kogenta, who was now forever doomed to an eternity of war against the oni's spirit.

As long as his mission is not yet complete, Gekido-jin can resurrect himself endlessly, growing larger with each new body. But as he uses the stone and soil of Kiryoku-shima to do this, he must be on the island in order to do so.

While not technically a special power, Gekido-jin possesses a large war hammer which he uses to bludgeon his opponents.

↑ back to top ・ contents
Retrieved from "http://wikizilla.org/w/index.php?title=Gekido-jin&oldid=161172"
Categories: