King Godzilla is a chimera of Godzilla, King Ghidorah and Battra. Instead of arms, he has King Ghidorah's left and right necks and heads. He possesses Godzilla's body, but his legs are from King Ghidorah. Finally, he has Battra's wings and brain. King Godzilla is also bulkier than his normal counterpart, and has a more pronounced breastbone. If King Godzilla's chest is destroyed, he reveals that he actually has a fourth component, Biollante's DNA. This manifests in the form of her head, which he then uses to fire a powerful jet of sap from his now-repaired chest.

After having almost all of his kaiju destroyed, Dr. Oniyama combined DNA which he had harvested from Godzilla and King Ghidorah III. While exploring the seabed of Tokyo Bay with a submarine, he found the lifeless body of Battra, which he took the wings and brain from. He then unleashed it upon Japan, with Oniyama cutting off his head[1] and personally controlling his new creation from within. King Godzilla surfaced from the sea off the coast of Oniyama's secret island Satan Atoll to attack a United Nations escort, first destroying the F-14 fighter jets attempting to attack the island, then shooting down the plane Hideo Kaneko and his friends were on, which crashed into the shores of the island.

King Godzilla began menacing the downed humans on Oniyama's command, until Godzilla suddenly appeared, and immediately challenged King Godzilla to a fight. Weakened by his near-constant battles, Godzilla failed to avoid most of King Godzilla's attacks, but managed to rip off one of King Godzilla's Ghidorah arms. Eventually, King Godzilla lifted Godzilla into the air and dropped him onto a set of spikes, mortally wounding him.

With no opposition, Oniyama commanded King Godzilla to begin attacking Japan, and after regenerating from its injuries King Godzilla rampaged, firing a combination of Godzilla's atomic breath and King Ghidorah's gravity beams to destroy entire cities at a time.

Realizing they would have to continue the fight, Hideo, Yosuke, and Linda Miller piloted Machine G into battle at Satan Atoll. In a dramatic aerial confrontation, the mech used its twin masers to deal devastating damage to King Godzilla. Machine G managed to blow a hole straight through King Godzilla's chest and multiple tears in its wings, but then the kaiju unleashed its most powerful weapon yet, the head of Neo Biollante. King Godzilla used Neo Biollante's head to fire a powerful jet of sap at Machine G, destroying his twin masers and sending the mech falling to the ground. King Godzilla began to crush Machine G's head, but Godzilla intervened, having been restored by a bolt of lightning.

After destroying King Godzilla's Neo Biollante head, Godzilla knew that he would need to take immediate action if he was to defeat King Godzilla and Oniyama for good. Shooting King Godzilla down when he tried to mount an attack from the air, Godzilla then leapt forward, grabbing hold of King Godzilla and hurling himself into the mouth of the volcano. Plunging into the boiling magma, Godzilla had secured his victory against his modified double and its creator; all three disappeared below the surface of the molten rock. 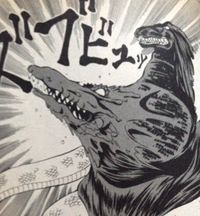 King Godzilla can use Atomic Breath, identical to that of Godzilla.

King Godzilla can lift things equal to or greater than his own weight, including other kaiju such as Godzilla. King Godzilla can also use the necks of his Ghidorah hands to strangle or ensnare opponents.

King Godzilla can fly using his Battra wings and slam into opponents.

If King Godzilla's chest is critically wounded, he will repair it by growing the head of Biollante. This head can fire a powerful jet of sap at opponents. King Godzilla boasts supreme levels of regeneration, being able to regrow conscious Ghidorah heads in just a few minutes between losing them. The only part of his body which doesn't regenerate is his chest, which instead alters itself and grows the Biollante head.

This is a list of references for King Godzilla. These citations are used to identify the reliable sources on which this article is based. These references appear inside articles in the form of superscript numbers, which look like this: [1]

↑ back to top ・ contents
Retrieved from "http://wikizilla.org/w/index.php?title=King_Godzilla&oldid=163035"
Categories: