Mecha-King Ghidorah's name is simply a combination of the word "mecha," which is derived from "mechanical," and "King Ghidorah." Mecha-King Ghidorah is never referred to by name in Godzilla vs. King Ghidorah, but his name is spoken during the opening narration of Godzilla vs. Mechagodzilla II. His name is sometimes abbreviated as Mecha-Ghidorah (メカギドラ,   Mekagidora). Japanese sources and merchandise sometimes offer different spellings of his English name. While the monster's official trademarked name includes a hyphen, it is spelled as Mecha KingGhidorah on the tag for the 1991 Bandai The Godzilla Collection figure, and Mecha King Ghidorah on the tag of the 2018 Movie Monster Series figure. A Kaiyodo resin cast model kit of the character spells his Japanese name as メカ・キングギドラ with an interpunct, and offers the English name Mechanical King Ghidora. The Japanese spelling with an interpunct was also used in the trailer for Godzilla vs. King Ghidorah as well as a program for the 1994 exhibition Great Godzilla Expo.[5] Godzilla.jp, Toho's former official Japanese site for the Godzilla series, misspelled Mecha-King Ghidorah's Japanese name as Mega-King Ghidorah (メガキングギドラ,   Mega Kingu Gidora).

Mecha-King Ghidorah resembles the purely organic King Ghidorah, but his middle head and neck, wings, chest, knees, and the tips of his tails are all replaced with mechanical parts. Mecha-King Ghidorah's cybernetic implants are all silver in color, except for the fronts of his wings, which are a dark gold color, and his mechanical head possesses green eyes.

In Godzilla Island, Mecha-King Ghidorah has three mechanical heads instead of one, and also has no gold coloring anywhere on his wings.

Mecha-King Ghidorah is completely under the control of Emmy Kano and M11, and as such does not act independently. He fights only to stop Godzilla. In Godzilla: Rulers of Earth, the Cryogs gain control over Mecha-King Ghidorah by severing his central head and replacing it with a mechanical one operated by the psychic commands of the twins Minette and Mallory. However, the two organic heads retain some autonomy and eventually allow Mecha-King Ghidorah to break free of the aliens' control. Upon regaining his independence, Mecha-King Ghidorah immediately abandons the battle against Godzilla and Anguirus and flees to outer space, possibly in search of other members of his kind according to Rhizon.

Mecha-King Ghidorah is the primary villain of the game Godzilla: Domination!, in which he is behind the disruptive energy waves emitted by the mysterious Meteor X which allow him to control other monsters.

Mecha-King Ghidorah is the result of King Ghidorah being revived and cybernetically modified using advanced futuristic technology in the year 2204. As King Ghidorah's middle head and wings had been destroyed in his battle with Godzilla in 1992, they were replaced with cybernetic implants. Emmy Kano then took control of the monster and returned to 1992 to confront Godzilla in Tokyo.

In Godzilla: Oblivion, Mecha-King Ghidorah is built by Dr. Elias Talbert and his assistant Ridley after King Ghidorah is rendered badly wounded by a nuclear explosion, in order to fight against Godzilla.

In Godzilla: Unleashed, Mecha-King Ghidorah is said to come from one possible future where King Ghidorah is defeated by an Earth Defender monster and is sent back to the present and converted into a cyborg by the Global Defense Force, explaining how he can co-exist at the same time with the organic King Ghidorah.

After defeating King Ghidorah and sending it to the depths of the sea, Godzilla began to wreck havoc throughout Japan. Emmy Kano, a Futurian who rebelled against her crew, and M11, her android, were asked if King Ghidorah could be revived in the 23rd century. If possible, he could be brought back to the present and used as an anti-Godzilla weapon to protect Japan. Emmy and M11 agreed and went to the future using the time machine KIDS.

Meanwhile, beneath the surface of the sea, Godzilla fired his atomic breath and freed himself from Mecha-King Ghidorah's grasp and left it behind, ensuring he would return to menace Japan again.

The damaged Mecha-King Ghidorah head in Godzilla vs. Mechagodzilla II

The 23rd century technology G-Force salvaged from the remains of Mecha-King Ghidorah played a major role in the construction of Mechagodzilla.

After facing yet another defeat at the hands of the inhabitants of Godzilla Island, the evil Xilien Zagres immediately realized it would take noting short of a miracle if her plans for planetary conquest were to succeed. Luckily for her, that miracle soon arrived in the form of a giant object, the Monster Vending Machine, that gave her the choice of purchasing a monster. Her choice: Mecha-King Ghidorah, a cybernetic monster that she hoped would assist her in her invasion. She then sent the monster down to Godzilla Island, where it landed in front of Godzilla. However, several moments passed, and Mecha-King Ghidorah did not move. Soon it became apparent to Zagres what must have happened: Mecha-King Ghidorah did not have a pilot, and would not work without either a pilot or modifications allowing it to work on its own. Godzilla then ventured forward and simply knocked the cyborg over, and very soon Besuke Jinguji and Torema formulated a plan: use the robot to attack Zagres's ship, the Vabaruda, in a full-frontal assault. The Commander soon took off in Mecha-King Ghidorah and Torema followed in her smaller ship, and the two attacked Zagres. For some time, the plan worked, but unfortunately a rogue asteroid knocked both the Commander and Torema back towards Earth. Using a tractor beam, Zagres brought Mecha-King Ghidorah back to her ship and soon flew it down personally to attack Godzilla Island. Fortunately, the monsters led an attack of their own, and soon drove the robot back into space. 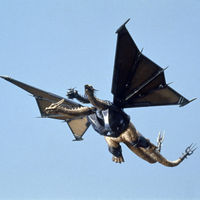 Mecha-King Ghidorah can fly at a speed of Mach 4 using anti-gravity generated by devices in the armor around his ankles.[13] Because of this, his wings are not actually required for flight and instead serve as solar panels,[13][14]:53 allowing him to fly even after his wings are badly damaged. Mecha-King Ghidorah prefers to attack by hovering overhead at a low speed and firing his weapons.

Mecha-King Ghidorah can fire Gravity Beams (引力光線,   Inryoku Kōsen), or Plasma Gravity Beams (プラズマ引力光線,   Purazuma Inryoku Kōsen), from his organic left and right heads, while the mechanical central head fires a triple Laser Beam (レーザー光線,   Rēzā Kōsen),[14]:15 from its Gravity Laser Cannon.[note 4] In Godzilla Island, in which all of Mecha-King Ghidorah's heads are mechanical, he fires the triple laser beam from all three heads. In Godzilla: Domination!, his beams are replaced by fireballs.

Mecha-King Ghidorah's organic heads can deliver an electrical shock through their bite.

Mecha-King Ghidorah is equipped with four electrified capture cables, called Godzilla Capture Devices (ゴジラ捕獲装置,   Gojira Hokaku Sōchi), and a large Machine Hand (マシンハンド,   Mashin Hando)[14]:52 which he can use to restrain Godzilla. These are strong enough for Mecha-King Ghidorah to be able to fly over large distances with Godzilla in tow, as seen in both Godzilla vs. King Ghidorah and Godzilla: Rulers of Earth.

With the time machine KIDS built into him and serving as his escape pod, Mecha-King Ghidorah is able to perform independent Time Warps (タイムワープ,   Taimu Wāpu), allowing him to arrive in the year 1992 from 2204. If the cyborg is badly damaged, KIDS is able to launch from him, carrying pilot Emmy Kano and M11's A.I. inside.

In the Atari and Pipeworks Godzilla video games, Mecha-King Ghidorah can fire electrical tasers that stun enemies temporarily and drain their energy.

In the Atari and Pipeworks games, Mecha-King Ghidorah does not have a standard block move but instead generates an energy shield which converts enemy energy-based attacks into health.

In Godzilla: Rulers of Earth, Mecha-King Ghidorah's organic heads can override control from the mechanical central head, allowing him to break free of Minette and Mallory's psychic control and abandon the Cryogs.

Mecha-King Ghidorah returns in Godzilla: Save the Earth. He plays similar to King Ghidorah, meaning he is powerful, slow, can fly, has a large amount of health, and has most of the some moves with some changes and different resistances. He does have two extra abilities, however. The first is that he has a taser attack that, if it connects, paralyzes his opponent and quickly drains away their energy. The taser can only be used three times, but collecting energy power-ups allows it to be used again. The other is that his block is an energy shield, which uses energy, and will absorb a weapon attack and convert it into his own health. Although he had the same rage attack as King Ghidorah in Destroy All Monster Melee (flying into the air while spinning around firing all three gravity beams), in Godzilla Save the Earth he now becomes temporarily invincible and any opponent that touches him is knocked away. 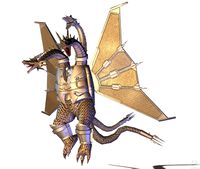 "Mecha-King Ghidorah is the GDF's best attempts to use the weapons of the Vortaak to defend Earth, rather than destroy it. After King Ghidorah's defeat at the hands of an Earth Defender in one possible future, the alien monster was rebuilt with GDF technology to serve the interest of mankind. To replace King Ghidorah's natural body armor, destroyed in the re-animation process, this new incarnation has been outfitted with a powerful energy shield to reflect weapon attacks. In addition, Mecha-King Ghidorah has replenishable taser weapons, which can drain an opponent's energy reserves. With most of his original form's combat techniques intact, Mecha-King Ghidorah might stand as humanity's best hope against the Vortaak invasion." 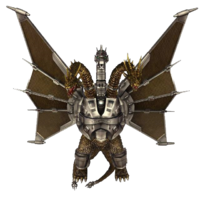 Mecha-King Ghidorah appears as a playable monster exclusively in the PlayStation 4 version of the game. Mecha-King Ghidorah has the ability to fly and fire gravity beams like King Ghidorah, but also possesses the Machine Hand from the film. When playing as Mecha-King Ghidorah in God of Destruction Mode, the player will need to defend cities from attacking kaiju, and prevent a certain percentage of the city from being destroyed. 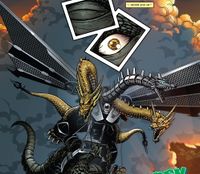 After Godzilla survived an onslaught of Mechagodzillas, Mecha-King Ghidorah flew above him and abducted him with his capture cables and Machine Hand. Mecha-King Ghidorah, who was being telepathically controlled by the psychic twins Minette and Mallory working for the Cryog leader Rhizon, was ordered to take Godzilla to a robotics facility in Russia, which Rhizon had converted into a battle arena. Ghidorah dropped Godzilla in the arena, where other Mechagodzillas were waiting. While the alien robots began to overwhelm Godzilla, Anguirus escaped from the downed Kiryu's grip and entered the arena to help Godzilla. As the battle progressed, the twins noted that either they were losing control over Mecha-King Ghidorah, or they never had it in the first place. After Godzilla destroyed the Mechagodzillas and Ghidorah's control module, the twins were knocked out from the shock and Ghidorah flew away into outer space under his own power. After this, Mecha-King Ghidorah disappeared and was never seen interacting with the Trilopods in any way, nor did the Cryogs ever attempt to retrieve him.

Mecha-King Ghidorah uses the same modified Rodan roars as the organic Heisei King Ghidorah, with the addition of more mechanical-sounding roars emitted by the central head. Mecha-King Ghidorah's roar was used for a space dragon in Kaizoku Sentai Gokaiger.

This is a list of references for Mecha-King Ghidorah. These citations are used to identify the reliable sources on which this article is based. These references appear inside articles in the form of superscript numbers, which look like this: [1]

Showing 17 comments. When commenting, please remain respectful of other users, stay on topic, and avoid role-playing and excessive punctuation. Comments which violate these guidelines may be removed by administrators.

↑ back to top ・ contents
Retrieved from "http://wikizilla.org/w/index.php?title=Mecha-King_Ghidorah&oldid=160277"
Categories: