KIDS (,   Kizzu) is a futuristic ship that first appeared in the 1991 Godzilla film, Godzilla vs. King Ghidorah.

A subship of the Earth Union Organization's massive time machine MOTHER, KIDS was commandeered by Wilson and the Futurians and sent back to 1992 Japan as part of a scheme to prevent the nation from becoming a corrupt economic superpower by 2204. The ship was sent further back to 1944 where it was used to teleport a Godzillasaurus off of Lagos Island, leaving behind in its wake three Dorats. Back in 1992, when Futurian Emmy Kano saw her comrades' true plan in action, she defected and took control of KIDS, using it to teleport MOTHER into the path of Godzilla so he could destroy it. KIDS was then used as an escape pod for Mecha-King Ghidorah, allowing Emmy to escape with her life after the cyborg was destroyed in battle with Godzilla.

KIDS made its first appearance when it transported the Futurians across Japan to meet the Prime Minister. It was later inside MOTHER when it was dispatched on its next mission, and was sent back in time to 1944 to keep Godzilla from being created. It was used to transport the Godzillasaurus to the ocean, and then it went back to the present. Once the Futurians' plan was uncovered, KIDS was used to teleport MOTHER right in front of Godzilla. Godzilla destroyed MOTHER, and KIDS went forward in time with Emmy Kano and M11 so they could create Mecha-King Ghidorah. After the battle between Mecha-King Ghidorah and Godzilla, KIDS was used to escape Mecha-King Ghidorah, which was underwater. It then went back to the future with Emmy, with the surviving computer of M11 accompanying her. 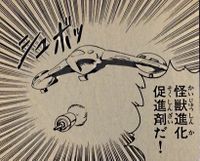 KIDS in Godzilla, King of the Monsters

KIDS was used by a descendant of Doctor Oniyama from the 25th century as his personal time machine, using it to go back in time in an attempt to alter the past and seek the assistance of his ancestor in the present day. Oniyama and his descendant brought KIDS to the present, with the former as the co-pilot as part of his plans to defeat Godzilla with Anguirus. Using a newly-constructed devolution beam cannon on the time machine's underside, Oniyama succeeded in devolving Godzilla into a Godzillasaurus. After Godzilla subdued the newly revived Anguirus (who at the time was just an Ankylosaurus), Oniyama used KIDS to shoot a huge syringe carrying modified DNA at Anguirus, evolving him to his full size. Anguirus leapt into the air and crashed down onto Godzilla, seemingly killing him, only for the devolution to wear off shortly afterwards, and Godzilla rose from the ground. After shoving a missile shot by Yosuke Kaneko's ASTOL-MB93 down Anguirus' throat, Godzilla watched as Anguirus made his escape, leaping into the air, only to explode violently, killing himself and destroying KIDS, leaving the fates of both Oniyamas unknown.

KIDS serves a near identical role in the manga adaption of the 1991 movie, although two additional scenes more heavily feature the craft. In the first expanded scene, M11 used the craft to fend off the Godzillasaurus when he confronted the exploration party on Lagos Island. After firing upon the creature to get him to back away from Emmy and Kenichiro Terasawa, M11 hit him with the teleportation dish's ray.

As in the film, Emmy Kano emerged from Mecha-King Ghidorah in KIDS after Godzilla shot it down, while bidding her ancestor Terasawa farewell. Blasts of radioactive energy burst from the sea beside KIDS. With the last of his energy, Godzilla turned his rage upon the time ship and repeatedly fired at it. One ray seemed to destroy KIDS, but it survived.[2]

This is a list of references for KIDS. These citations are used to identify the reliable sources on which this article is based. These references appear inside articles in the form of superscript numbers, which look like this: [1]


↑ back to top ・ contents
Retrieved from "http://wikizilla.org/w/index.php?title=KIDS&oldid=169584"
Categories: